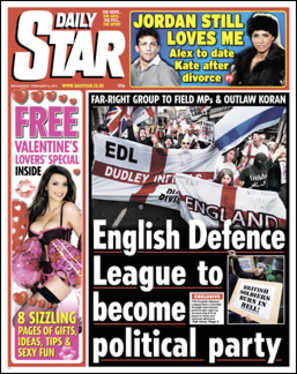 The Daily Star has been accused of printing fictional stories by a disgruntled reporter who has resigned over its “hatemongering” anti-Muslim propaganda. In a resignation letter, Richard Peppiatt said he was leaving after the Star gave sympathetic coverage to the far-right English Defence League last month.

Peppiatt, who handed in his resignation this week, said the “incendiary” suggestion the EDL was planning to field election candidates was known to be an exaggeration. “But further up the newsprint chain it appears a story, too good to allow the mere spectre of reality to restrain, was spotted,” he wrote.

The EDL story is one of a number of prominent articles published by the Star that Peppiatt claims were made up, including some of his own. The reporter was recently involved in stories claiming Rochdale council had spent taxpayers’ money on “Muslim-only squat-hole loos”. In fact, the toilets were neither paid for by the local authority or “Muslim-only”.

“I was tasked with writing a gloating follow-up declaring our post-modern victory in ‘blocking’ the non-existent Islamic cisterns of evil,” Peppiatt wrote. The Press Complaints Commission later ruled the story was inaccurate and misleading.

As a young reporter desperate to make his name in Fleet Street, Peppiatt concedes he took to his commissions “with gusto”, but now questions the ethics of what he was required to do, suggesting he was at times promoting an anti-Muslim agenda.

“On order I dressed up as John Lennon, a vampire, a Mexican, Noel Gallagher, St George (twice), Santa Claus, Aleksandr the Meerkat, the Stig, a transvestite, Alex Reid. When I was ordered to wear a burqa in public for the day, I asked: ‘Just a head scarf or full veil?’ Even after being ambushed by anti-terror cops when panicked Londoners reported ‘a bloke pretending to be a Muslim woman’, I didn’t complain.

“Mercifully, I’d discovered some backbone by the time I was told to find some burqa-clad shoppers (spot the trend?) to pose with for a picture [with me] dressed in just a pair of skin-tight M&S underpants.”