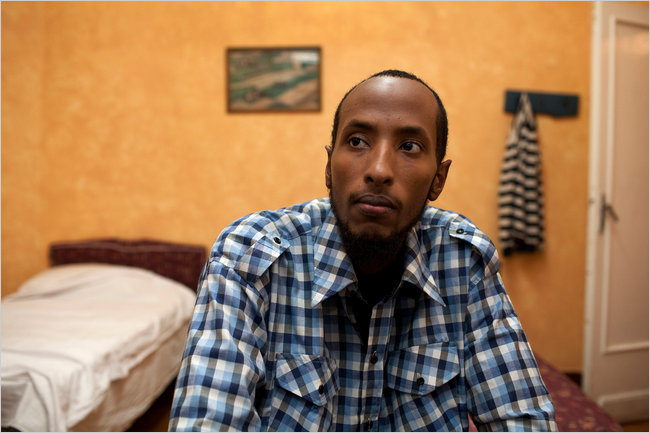 U.S. civil liberties groups are protesting the case of a 26-year-old Muslim-American man who was placed on the no-fly list and barred from returning to the States after spending 18 months in Yemen.

Yahya Wehelie, an American citizen, remains stranded in Cairo after being stopped there by FBI agents while en route back to his Virginia home six weeks ago, The New York Times reports. The agents questioned Wehelie about his contact with other Americans in Yemen, including a New Jersey man suspected of joining al-Qaida and killing a hospital guard in Yemen.

Yehelie and his family, who live in Burke, Va., told the Times he despises al-Qaida and went to Yemen to study and meet a wife. Though issued a temporary passport and cleared by the FBI to return to the U.S., he remains on the federal no-fly list, unable to travel home by plane and fresh out of other options.

“How can he travel home if he can’t fly?” Ibrahim Hooper of the Council on American-Islamic Relations (CAIR) said in an interview with AOL News. “We’re just concerned that this is part of a pattern of government officials stopping Muslim travelers, American Muslim citizens, to pressure them to give up the constitutional rights that they would normally have if they were on American soil.”

Hooper said Wehelie was interrogated several times, subjected to “psychological pressure” and denied access to an attorney. He told AOL News he emphatically objects to allowing anyone who is a danger to America to board a flight here, but said that does not seem to be the case with Wehelie. “These no-fly lists are vast,” he said. “There needs to be some legal type of oversight on who should really be on it.”

The American Civil Liberties Union has also decried Wehelie’s case and those like it, saying the “vast majority” involve American Muslims. “There is absolutely no legal basis for placing a U.S. citizen into effective exile. There’s no question that it’s illegal to do so,” Ben Wizner, an ACLU senior staff attorney, told AOL News. “If the U.S. wants to investigate [Wehelie], there is unquestionably a safe way to bring him home to do so.”