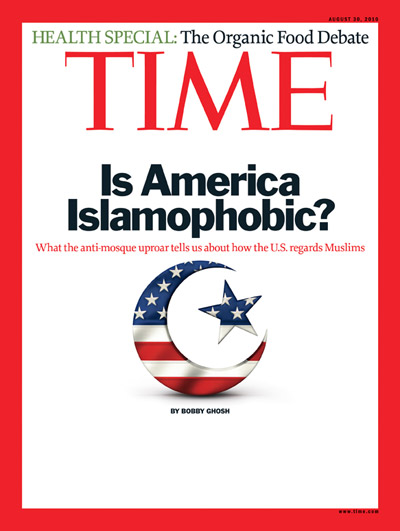 “Depending on the poll one consults, anywhere from 54 percent to 61 percent, and as many as 68 percent of Americans, oppose the building of an Islamic community center two blocks from ‘Ground Zero’, the site of the World Trade Center. Polls, of course, are notoriously inaccurate measures of public opinion.

“Depending on the framing of the question, the positioning of a question among a series of others, the sample population, and other factors, one might expect different results. Nevertheless, a majority of the public seems to be opposed to the construction of the Islamic center, known as the Cordoba House or Park51 Project.

“What do we make of this? Has the U.S. as a society taken a precipitous turn against Muslims? Or as the cover of Timemagazine asks, ‘Is America Islamophobic’? We might also ask if the U.S. is becoming like Europe – where several nations, with popular support, have taken actions such as banning the veil in schools, putting a halt to the construction of minarets, etc.?”

Excellent article by Deepa Kumar, analysing the campaign against the “Ground Zero mosque” and outlining a strategy for the US Left.

And, speaking of “Ground Zero mosque” polls, the New York Post has the results of the latest one. (Full poll results here.)