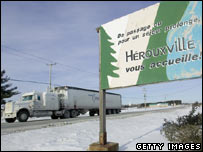 Immigrants wishing to live in the small Canadian town of Herouxville, Quebec, must not stone women to death in public, burn them alive or throw acid on them, according to an extraordinary set of rules released by the local council.

The declaration, published on the town’s Web site, has deepened tensions in the predominantly French-speaking province over how tolerant Quebecers should be toward the customs and traditions of immigrants.

“We wish to inform these new arrivals that the way of life which they abandoned when they left their countries of origin cannot be recreated here,” said the declaration. “Therefore we consider it completely outside these norms to … kill women by stoning them in public, burning them alive, burning them with acid, circumcising them etc.”

Salam Elmenyawi, president of the Muslim Council of Montreal, said the declaration had “set the clock back for decades” as far as race relations were concerned. “I was shocked and insulted to see these kinds of false stereotypes and ignorance about Islam and our religion … in a public document written by people in authority who discriminate openly,” he told Reuters.