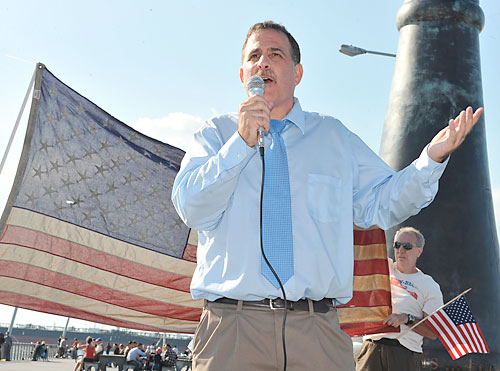 More than three dozen self-professed Tea Party members rallied next to the 9-11 memorial at the 69th Street pier on Sunday to condemn controversial mosques near Ground Zero and in Sheepshead Bay.

“Islam has an inherent aggressiveness and the Muslim American Society [the developers of the Sheepshead Bay mosque] are their warriors on the front line,” claimed John Press, president of the Brooklyn Tea Party, which plans to attend a protest outside the Voorhies Avenue mosque site this Sunday. “We have to delay their expansion.”

At least one woman spent the afternoon in a black burka, carrying a sign reading, “I am Nancy Pelosi,” a reference to the Speaker of the House, a Democratic who has become a lightning rod for conservatives nationwide.

Former Lt. Gov. Betsy McCaughey, Blue Collar Corner blogger Andrew Sullivan, Republican congressional candidate Bob Turner and Republican Assembly candidate Nicole Malliotakis all addressed the crowd, although Malliotakis did not take the Brooklyn Tea Party pledge to freeze the budget and reduce capital spending by 15 percent, to fight the so-called Ground Zero mosque and support a divisive Arizona immigration law that allows police to demand immigration papers from anyone they suspect of being in this country illegally.

The Brooklyn Tea Party formed five months ago. Sunday’s rally was its second, and most successful, outing, Press said, adding that party members usually meet informally every Sunday at the Kosher Hut of Brooklyn on Kings Highway in Midwood.

Many Tea Party groups focus strictly on fiscal issues, but the Brooklyn Tea Party has a strong social conservative component in line with Press’s strong “culturist” beliefs. But Press denied that his group’s opposition to the two mosques is racially motivated.

“This has nothing to do with race. It has to do with culture,” he said. “We fully acknowledge some cultures are different and cultural diversity is real. This is not an Islamic country. We have the majority culture based on democracy and the separation of church and state. We have our own holidays, history and heroes – and we must define and protect it.”