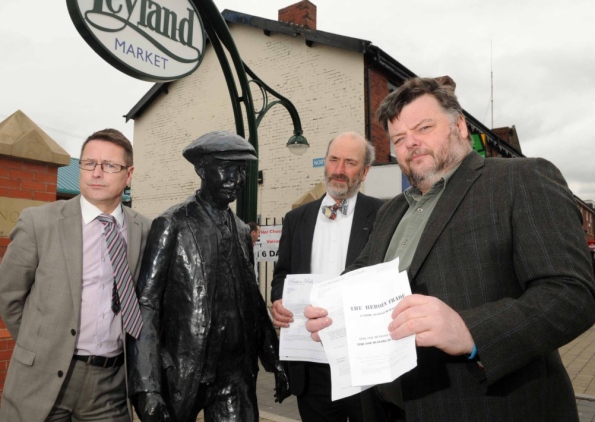 Coun Derek Forrest, who represents Leyland Central, said: “We do not want this sort of thing in South Ribble. It really upsets me that this man cloaks himself in the memories of men who sacrificed themselves to put forward this racist trash.

“He is abusing the good will of the armed forces for his own devious means. He hand-delivered the leaflet to my house, and personally addressed me in his letter.

“I suppose it is inevitable that some of this sewage will leak across the river to South Ribble, but I would urge anyone who has received this to treat it with the contempt it deserves.”

Mr Bamber, who lives in Preston, was taken to court in 2010 accused of distributing leaflets designed to inflame religious hatred against Muslims, but was found not guilty. Leaflets had been posted in Barnoldswick, and two barristers and a Cumbrian college were also sent the material.

Leyland Central councillor, Caleb Tomlinson, said: “He says that as councillors, people in our position should use our influence to help support his campaign. I feel cases like this demonstrate why councillors’ addresses should not be published on the council’s website; we are being targeted.

“This is full of loathing and hatred towards a religious group, and I do not want it being put through my door. It’s an absolute outrage. It’s appalling to put something like that in writing and distribute it. He doesn’t mention that he is a member of the BNP party in his Preston Pals leaflet. It is a foul and offensive piece of literature.”

Lostock Hall councillor Cameron Crook added: “I’m puzzled as to why I have been selected, and I was shocked when I read the content.”

Speaking on behalf of Mr Bamber, BNP spokesman Simon Darby said: “Tony is a very active campaigner, and for a very good reason. He is naturally spreading the message across Lancashire that there is more and more evidence to suggest that the deliberate spreading of heroin is an ethno-religious ploy to pose a risk to our population. Some might see that as being quite extreme, but it’s the truth.”

A police spokesman said: “We understand that some people may find the content of the leaflet disturbing or offensive. Lancashire Police takes the distribution of these leaflets very seriously and have previously investigated their content.

“An individual was charged and sent to crown court, however, after consideration, the court found that the content of the leaflets did not constitute an offence. As such no crime is being committed in the distribution of these leaflets, and Lancashire Police are unable to take any action at this time.”

The individual who was charged with inciting religious hatred in connection with the “Muslim heroin trade” leaflet was of course Tony Bamber himself. He was indeed acquitted at Preston Crown Court in June 2010 for reasons explained here. The fact that Bamber has resumed his campaign to incite hatred against the Muslim community underlines once again the need to amend the religious hatred law so that Muslims enjoy the same legal protection from racists and fascists that Jews and Sikhs do. 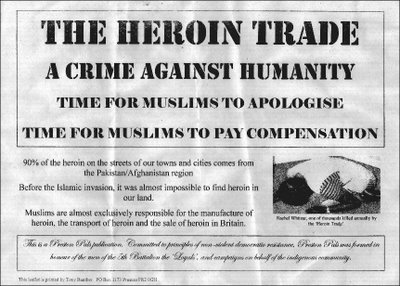