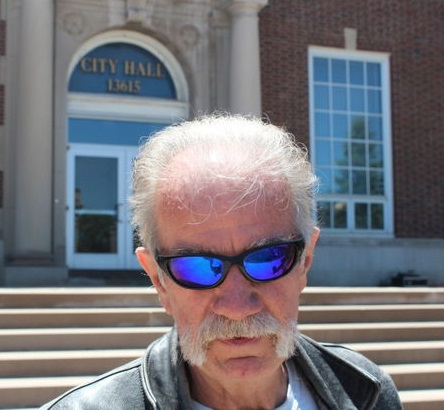 DEARBORN, MI — The bikers who invited anti-Muslim activist Terry Jones to demonstrate in Dearborn split before the rally. More police were on hand than Terry Jones supporters in attendance.

Jones, in a black leather Harley Davidson jacket, jeans, with blue-tinted sunglasses and a handlebar mustache, said he and a cavalcade of nearly 100 bikers from an organization called American Patriotic Riders made passes at mosques in Detroit and Dearborn before arriving at Dearborn City Hall for a rally.

Except the bikers never arrived. Jones said they feared police would photograph their license plates and conduct surveillance on them. “They all had good leather jackets on; they looked really tough,” said Jones to about 20 attendees, not including media and law enforcement. But “they’re a bunch of stinking cowards … ”

Jones, whose anti-Muslim rhetoric has included widely publicized burning of the Quran, the Islamic Bible, spoke for more than 15 minutes on his perception that the religion is evil, focusing heavily on his opposition to Sharia law, the government enforcement of Muslim rules.

Jones, a pastor, leads the organization Stand Up America Now, a Christian-influenced organization that advocates free speech and criticizes Islam. Jones said American Patriotic Riders invited him to Dearborn and his organization paid the travel expenses for himself and several other members.

“Those Muslims are not welcome in America,” Jones said, referring to Sharia law supporters. He said small groups of Muslims are “peaceful,” but “as they get larger, they desire to put Sharia law in place.” He called Islam, “totally not compatible with Western society” and “the biggest violator of human rights of all time” for their treatment of women.

“You can’t trust Muslims,” he said, referencing Taqiyya, a Muslim principle that allows illegal acts or deception in the face of persecution.

There were no Jones protestors in attendance, but several admonished Jones from passing vehicles or bicycles. Several people in Islamic dress watched from across Michigan Avenue. “You’re a jackass,” said one passerby. Another vulgarly recommended Jones procreate with himself.

Jones took issue with the heavily-fortified police presence. When his pre-rally procession attempted to pass the Dearborn Islamic Center – where the protest was supposed to take place before police forced the move to City Hall – they found police wouldn’t allow access.

“They even blocked the roads,” he said, “which I would ask, isn’t that against the law and isn’t that unconstitutional.

Wayne County sheriff’s deputies guarded a blockade to the east of the mosque.

Although police relaxed the request, they initially told media to cover the rally from a barricaded area to the side of the City Hall courtyard.

One of the more than 20 officers at City Hall videotaped the crowd and Jones throughout. When vehicles pulled up to parking spots immediately in front of City Hall, they were told to move.

Dearborn Police Chief Ron Haddad, who watched the rally from atop the steps leading into City Hall, refused to answer questions related to the law enforcement presence or participants.

Three burnt Qurans were left outside the Karbalaa Islamic Education Center in Dearborn earlier this week. Jones says: “They can burn the Quran because.. from a pastorial view, the Quran is the devil.”