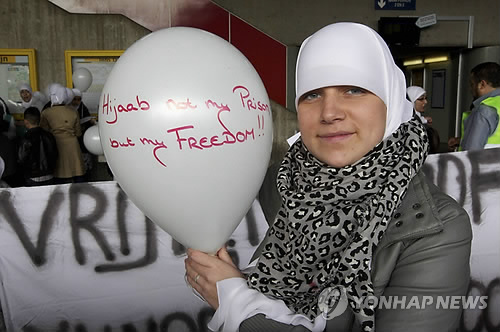 After being refused an extension of her contract because she wore a headscarf to work, an employee of Hema last week turned down a new job offered by the Dutch-owned retail chain. Antwerp-born Joyce Van op den Bosch, 20, said the new offer was not satisfactory.

“This is not my old job as a saleswoman; here I have to stay in the warehouse. I won’t be accepting their offer,” she said. In addition, the contract was temporary and part time, while Van op den Bosch had been promised a full-time job.

Van op den Bosch had been employed by Randstad as temporary staff in the Hema store in Genk, where she lives. When her contract reached its end and was not renewed, she was told there had been customer complaints about her headscarf. According to a spokesman for Randstad, wearing a headscarf was “not in conformity with Hema’s company dress code”. Her contract was not renewed, he said, because she had declined to comply.

At the beginning of her employment, Van op den Bosch had asked if wearing a headscarf was acceptable, and she was told it was. She was even provided with a Hema headscarf, as worn by staff in the Netherlands. That went on for two months, then came “many negative reactions” from customers, according to Hema spokesperson Inge Van Baarsen. The company declined to say how many complaints were received.

In a statement, the company made an unusual claim: “Since in Belgium is it not customary to wear a headscarf in a public place”, Hema decided to ask Van op den Bosch to stop wearing the headscarf, which she declined to do. “We wish to stress that this decision is not connected to the wearing of a headscarf as such, but that it applies to any outward appearance which is not in keeping with the neutral and discreet image of Hema,” the statement said.

However, Jozef De Witte, director of the Belgian Centre for Equal Opportunities and the Fight Against Racism, said that the case appears to be discrimination. The temp agency cannot discriminate among their staff on the basis of the complaints or prejudices of a client – in this case Hema. Unless the store cancelled its contract with Randstad as a whole, it would be guilty of discriminating against one member of staff.

Randstad later admitted it had misgivings about the question of discrimination against the wearing of a headscarf and had applied earlier this month to the Centre for Equal Opportunities for advice. The centre said a headscarf was in most cases not a significant item of business clothing and so could not be grounds for dismissal. Randstad later said it could not take the centre’s advice, since a number of employment law experts disagreed.

Last weekend, Hema issued the statement: “By permitting the wearing of a headscarf and later withdrawing permission, Hema behaved unfairly towards the temporary employee. Internal rules for work clothing have now been refined, central to which is that staff should be as neutral as possible in the view of the public.”

For Van op den Bosch (pictured), nothing is decided. “This week on Wednesday I have an appointment with my lawyer,” she said. “Then we’ll know where everything stands.” Also last weekend, about 300 people took part in a demonstration organised by supporters of the right to wear a headscarf.

Meanwhile, the controversy over the headscarf was also revived again at the federal level after a member of staff of the socialists appeared in parliament wearing one. N-VA called for a ban on the display of all religious symbols in parliament, a position supported by French-speaking liberals and the far-right Vlaams Belang.

Last year Jan Peumans, N-VA speaker of the Flemish parliament, reprimanded Vlaams Belang’s Filip Dewinter after he called for the expulsion of a woman wearing a headscarf in the public gallery.