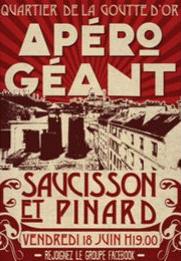 Anti-racism activists have condemned plans to hold a “pork sausage and wine” party in a multi-ethnic Paris district to protest against what the organisers call the area’s “Islamisation”.

SOS Racisme called for the event scheduled for Friday in the Goutte d’Or area of north Paris to be banned because it sent out a “message of hate and of violence towards groups of people because of their real or supposed origins”.

The opposition Communist Party said in a statement that “this disgusting joke seeks to exacerbate the differences that make for the richness of the 18th arrondissement (district)”.

Sylvie Francois, a local resident, told French radio that she set up a Facebook page for the event to fight against what she saw as the increasing “Islamisation” of her area.

The project has been publicised on internet social networking sites by a small far-Right group that calls itself the Bloc Identitaire.

Paris police said they will meet with the event’s organisers on Tuesday to consider their official request for permission to hold the event.