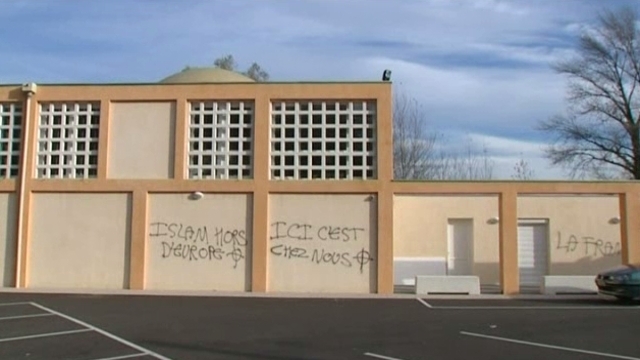 To their bewilderment and bitterness, on the morning of Saturday, November 24, Muslim worshippers at Villefontaine in northern Isère discovered racist graffiti on the walls of their mosque.

When they arrived at the mosque for their morning prayer, the Muslim faithful of Villefontaine found that the walls of their religious enclosure were covered with graffiti. The clearly Islamic slogans “Islam out of Europe” and “This is our home” had been written in black spray paint.

The public prosecutor in Vienne has just ordered an inquiry to be opened into criminal damage aggravated by its anti-Muslim character. This was assigned to the police force at Bourgoin-Jallieu.

In parallel, other slogans were discovered on the walls of the Sainte Marie Catholic boarding school, opposite the train station at Verpillière. These similarly involved Celtic crosses, which are often used by far-right movements.

The French Council of the Muslim Faith (CFCM) has issued a statement condemning the attack. Pointing out that this is just the latest in a long list of such attacks that have taken place since the beginning of 2012, the CFCM calls on the government to devote more resources to finding the perpetrators.

AFP reports that on Sunday afternoon some 300 people gathered in front of the Villefontaine mosque to express their support for the Muslim community. They included representatives of other faiths and political leaders. In his speech the rector of the Lyon Mosque, Kamel Kabtane, repeated the call made by the CFCM for a parliamentary inquiry into the rise of anti-Muslim hatred in France.