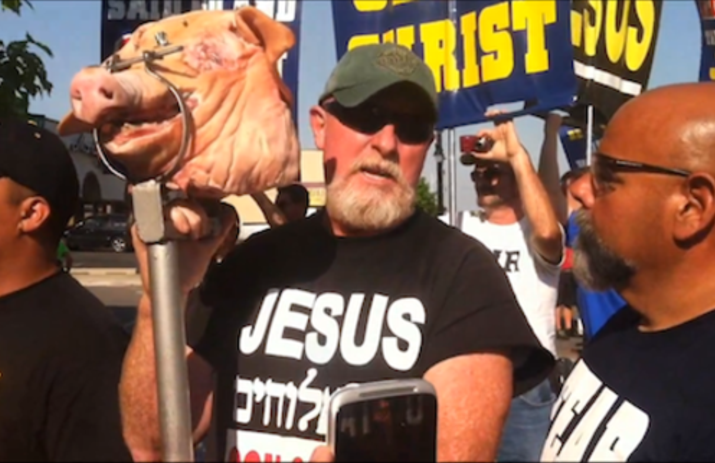 A civil rights organization is defending the free-speech rights of a Christian group that hates Islam, saying its members were unfairly removed from the Arab International Festival in Dearborn in 2012.

In a legal brief filed this month, attorneys with the Michigan branch of the American Civil Liberties Union (ACLU) said that Wayne County sheriff’s deputies violated the First Amendment by ordering a group of Christian evangelists from California called the Bible Believers to leave or face citations for disorderly conduct.

At the annual festival in June 2012, the Bible Believers brought a pig’s head mounted on a pole and signs with anti-Islam messages that denigrated Islam’s prophet. Observant Muslims consider pigs to be unclean.

They also shouted crude messages at festival attendees, many of whom were Muslim. In response, members of the crowd hurled water bottles and rocks at the Christian group, who walked away to avoid being hit. As they walked away, some in the crowd followed and continued to pelt them.

Attorneys for the Bible Believers filed a lawsuit against the Wayne County Sheriff’s Office, which was thrown out last year by U.S. District Judge Patrick Duggan in Detroit, saying deputies were justified in removing the evangelists “because of the effect the speech had on the crowd.”

In August, a three-judge panel with the U.S. 6th Circuit Court of Appeals upheld Duggan’s decision. But in October, the full court vacated that decision, saying the 15 judges will reconsider the case in March.

It was a rare move, one that was praised by attorneys with the American Freedom Law Center, a conservative group co-led by Ann Arbor attorney Robert Muise that is representing the Bible Believers.

The center, which often fights what it sees as Islamic extremism in the U.S., says the violent reaction of Muslims at the festival is an attempt to stifle criticism of Islam.

While the ACLU attorneys disagree with the message of the Bible Believers, they agree that their rights were violated.

“By ordering the Bible Believers to leave the Festival or else be cited for disorderly conduct, (Wayne County Sheriff’s deputies) violated the Bible Believers’ free speech rights under the First Amendment,” the ACLU said in their friend-of-the court brief. When “even offensive speech takes place in a public forum, police must take reasonable steps to protect speakers faced with a violent audience.”

The ACLU said the festival attendees are to blame for the violence, not the Bible Believers, who were peaceful and did not incite violence.

While the Bible Believers’ speech was “highly offensive and needlessly antagonistic … unpleasant and disturbing … it must be tolerated in a free and diverse society such as ours,” the ACLU said.

The ACLU noted the legal precedent of the heckler’s veto, which means that just because someone’s speech may provoke a response, police can’t use that as an excuse to stop the exercise of free speech. If police did that, “virtually every violent reaction by an angry crowd could be used to justify a content-based restriction on speech.”

Nabih Ayad, attorney for the Wayne County Sheriff and chair of the Arab American Civil Rights League, said he was disappointed in the ACLU’s brief.

“This is not a free-speech issue, but a public safety issue,” said Ayad, a former state civil rights commissioner. “I understand the First Amendment and I’m for free speech, but when a riot is about to break out, free speech must take a backseat to public safety.”

Rana Elmir, deputy director for the Michigan branch of the ACLU, said the organization finds “the Bible Believers’ hate-filled speech and tactics vile and offensive, however, we cannot allow a precedent-setting court decision to stand that permits the government to shut down people’s speech because of the reactions of others. Doing so creates a dangerous precedent in which the majority can always prevent the expression of ideas it does not like.”

The ACLU’s legal brief puts them on the side of groups whose overall views they don’t agree with, but “censorship is never the answer,” she said.

The ACLU has fought before to protect the rights of anti-Islam speakers in Dearborn. In 2011, the ACLU strongly objected to the jailing of Quran-burning Pastor Terry Jones after he faced a trial for trying to protest outside the Islamic Center of America in Dearborn.

The ACLU also has fought to defend the rights of Arab Americans and others to hold rallies in Dearborn for pro-Arab causes, Elmir noted.

The annual Arab Festival ended in 2013 because of higher insurance rates stemming from religious tensions at the festival, including the 2012 incident with the Bible Believers.