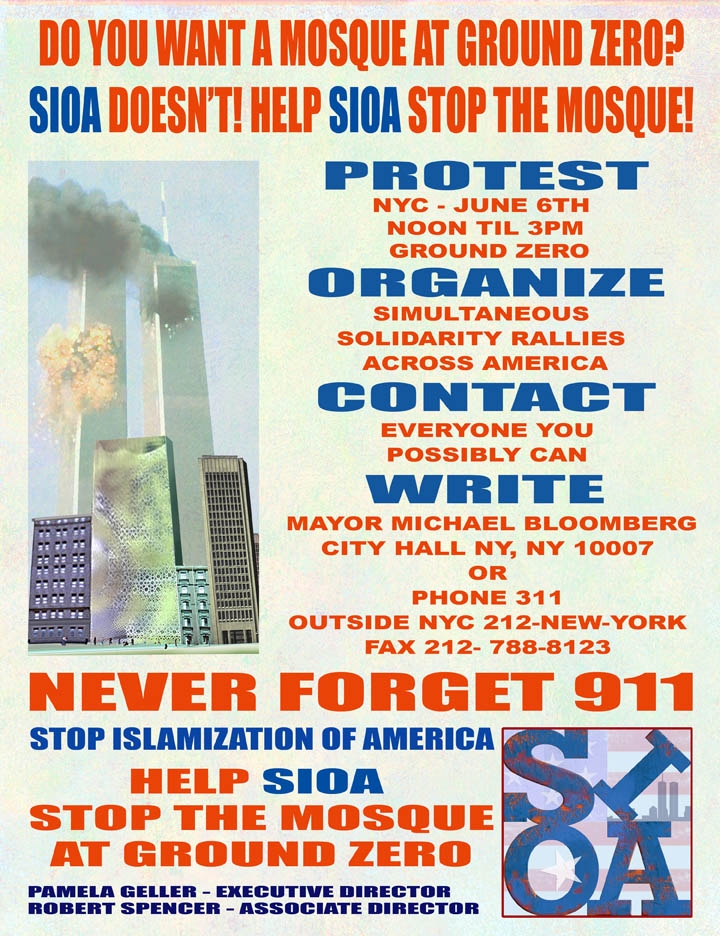 Thus Douglas Murray’s take on the proposal to build a new mosque and community centre in New York, not far from the site of the former World Trade Center.

Meanwhile, over in the USA, Pamela Geller and Robert Spencer have written a piece entitled “The 9/11 mosque’s peace charade“. They dismiss the anti-extremist credentials of the Cordoba Initiative and the American Society for Muslim Advancement, the organisations proposing to build the mosque:

“How will a mosque, the place where jihadis go for spiritual sustenance, at Ground Zero help stop jihad terrorism? … Whom does a mosque at 9/11 really honor: the Americans who lost their lives, or the jihadis who murdered them?”

Geller and Spencer are organising a protest rally on 6 June through their organisation Stop Islamization of America.

And one Mark Williams, a leading figure in the Tea Party movement, has written on his blog:

“The animals of allah for whom any day is a great day for a massacre are drooling over the positive response that they are getting from New York City officials over a proposal to build a 13 story monument to the 9/11 Muslims who hijacked those 4 airliners. The monument would consist of a Mosque for the worship of the terrorists’ monkey-god and a ‘cultural center’ to propagandize for the extermination of all things not approved by their cult.”