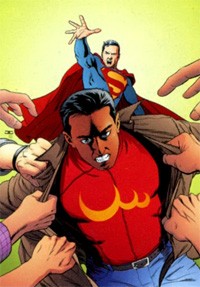 Ever since it was solicited three months ago, DC has been billing Superman #712 as a story where Superman goes to Los Angeles and meets the West Coast’s newest super-hero, Sharif, a young man dealing with a public that might not want his help. If you go to your local comic shop and pick the issue up today, however, that’s not the story you’re going to get. Instead, the issue now contains a completely different story.

At first glance, this might not seem like a big deal, because after all, fill-ins happen all the time. But given that writer Chris Roberson has said that the entire issue has been completed, it seems like there might be a deeper reason that this story got the axe – and it’s hard to believe it doesn’t have something to do with the fact that Sharif is a Muslim.