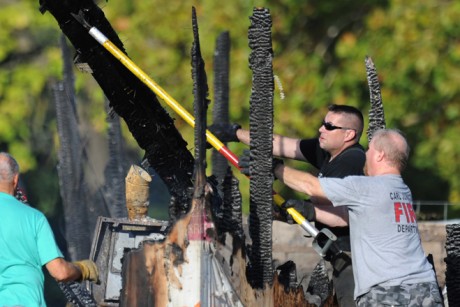 JOPLIN, Mo. — An online fundraiser for the Islamic Society of Joplin is well on its way to its goal of $250,000.

The fundraiser, on the crowdsourcing website indiegogo.com, has caught the attention of people worldwide. The site is indiegogo.com/joplinmosqueofficial.

Kimberly Kester, a member and spokeswoman for the local mosque, said the contributions have come from faraway places, including Indonesia, Germany, Saudi Arabia and Singapore, and from mosques all over the United States. “It’s really amazing,” Kester said. “I’m really surprised and really thankful.”

The mosque has some friends in important positions. Kester said Shahed Amanullah provided assistance in creating the online fundraiser. Amanullah is senior adviser for technology for the U.S. State Department, working on digital diplomacy in the Office of the Special Representative to Muslim Communities Worldwide. The office reports to Secretary of State Hillary Clinton.

Amanullah said by phone that he knew people who traveled to Joplin to do relief work after the tornado on May 22, 2011. He called upon those contacts after learning of the destruction of the mosque in a fire early Monday. He said there was a need to create a fundraiser quickly, to take advantage of news cycles and of Ramadan, which is an important time of charity for Muslims. “It’s a positive reaction as opposed to a negative reaction,” he said. “I wanted to help.”

Amanullah said people still have strong feelings of support for Joplin, more than a year after the tornado. “It’s a heartfelt feeling,” he said. “People believe in Joplin, when it comes down to it. They want to give back to that community.”

He said a rebuilt mosque would be the strongest message to send to anyone wanting to destroy it. Including as many people as possible in the effort also makes a difference, he said. “That’s the best message,” he said. “It’s one community that cares about each other. Joplin is teaching the world how to respond to tragedy.”

Amanullah said he also shared information about the online fundraiser with his widespread network of contacts.

Kester said she hoped to reach the $250,000 fundraising goal by Aug. 18, which is Eid al-Fitr, the holiday marking the end of Ramadan. She said people may continue to contribute even after the goal is reached. All contributions are eligible to be tax-deductible.

Kester acknowledged that some have questioned why the mosque needs more money since it was insured. She said rebuilding will cost more than the insurance will pay. The former church that served as the mosque didn’t always have adequate space, and the arrangement of the space didn’t necessarily correspond with what is needed for a mosque, she said.

The Islamic Society also plans to include more security in a new mosque, along with measures to be prepared for emergencies, including tornadoes. Kester said members want the mosque to have a playground, but with some sort of barrier between it and the street. The barrier is needed, she said, to protect children from the slurs yelled at them by people driving by. She said it’s sad, but necessary. “There’s really no way to get around it, because we want everyone to feel safe,” she said.

Kester said the leadership at the mosque hasn’t decided if the mosque should be rebuilt at the existing site on Black Cat Road, just west of Joplin, or at a site within the city. “We have discussed the pros and cons of rebuilding on the same spot,” she said.

THOSE WHO ARE UNCOMFORTABLE with online donations may send a check to the Islamic Society of Joplin, P.O. Box 3164, Joplin, MO 64803, or donate through the mosque’s account at Commerce Bank.