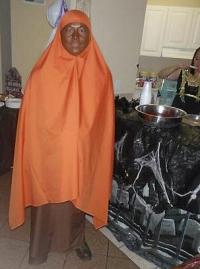 A second photo of a St. Paul police officer dressed in a Muslim hijab surfaced late this week, packing an extra wallop: The officer appears to be wearing blackface makeup.

The two pictures, apparently taken at parties in 2010 and 2012, have set off a storm of criticism from some Somali and Muslim community members who feel mocked and belittled by the images. St. Paul City Council Member Melvin Carter III called out the second image for the officer’s apparent use of blackface makeup. The first image did not include blackface makeup.

“The actions of the officers depicted in these photos are offensive and embarrassing,” Carter said in a written statement. “Mocking culture, skin color and religion for a laugh may seem trivial, but any behavior that violates the sacred, essential trust between our officers and residents is reckless and inexcusable.”

In the second image, an officer, who hasn’t been identified by the department, is wearing an orange jilbaab and what appears to be blackface makeup. Police said it’s unclear if the second officer was a sworn officer at the time the photo was taken, apparently in 2010. It appeared to originate on Facebook before it landed on Twitter.

Smith immediately opened investigations into both photos when they came to his attention.

“I’m disappointed and upset that officers in this organization may have poorly represented themselves,” Smith said. “My thing is that you’re an officer 24 hours a day, both on-duty and off-duty, and I’m not going to tolerate anything that could put a blemish on our St. Paul Police Department and our strong relationship with the communities that we serve.”

Although St. Paul officials have not commented on whether the officer is wearing blackface makeup, many community members believe he is, said Lori Saroya, executive director of the Minnesota Chapter of the Council on Islamic-American Relations (CAIR-MN). “We’re getting a lot of calls from the community,” she said. “I think it’s a lot more serious. It just opens a whole other door.”

CAIR-MN offered to provide diversity training for Buth, and will now call for department-wide training, Saroya said. “The one incident was seen as an anomaly,” she said. “Now with two incidents, it’s raising more concern about why officers think it’s OK to mock other people’s culture and religion.”