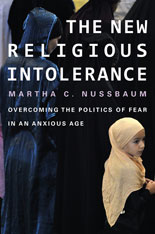 American philosopher Martha Nussbaum, author of the recently published book The New Religious Intolerance, examines the spurious justifications given for banning the niqab and burqa.

She concludes that “traditions of religious liberty and equality in both the United States and Europe” are under threat as the result of “a climate of fear and suspicion, directed primarily against Muslims”.