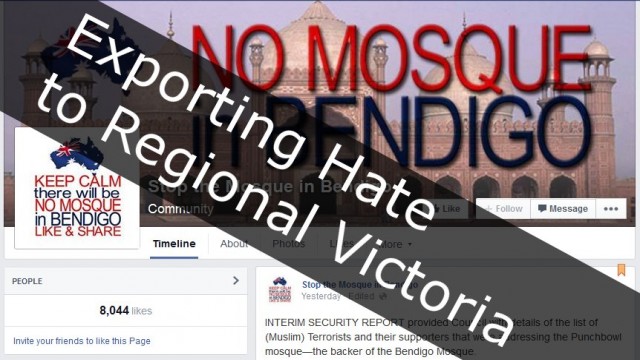 The Online Hate Prevention Institute has just published a useful report into the abuse of Facebook by the Stop the Mosque in Bendigo campaign to whip up anti-Muslim hatred, including explicit threats of violence.

Among the OHPI’s findings is this:

Our analysis of the “Stop the Mosque in Bendigo” page shows that the percent of supports from Bendigo itself is tiny. In our sample of 100 users who had recently engaged with the page, only 3% were from Bendigo. Victorians (including those from Bendigo) made up 20% while those from other Australian states and territories collectively made up 59% of the sample (over half of them from Queensland). 13% of the support was from outside Australia altogether. This analysis strongly supports the impression many locals have had, that the opposition to the Mosque was something being foisted on Bendigo by outsiders with their own agenda.

Social media is an enabling technology, and the power of this technology should not be available to groups which aim to manipulate our democratic processes, incite hatred, and put people’s safety at risk. The “Stop the Mosque in Bendigo” page should to be closed by Facebook before it can do further harm.