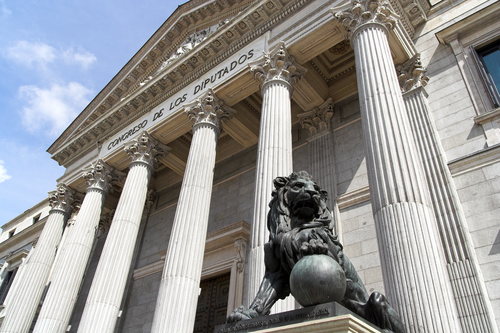 Spain’s Parliament on Tuesday rejected a proposal to ban women from wearing in public places Islamic veils that reveal only the eyes.

However, the Socialist government has said it favors including a ban on people wearing burqas in government buildings in an upcoming bill on religious issues to be debated after parliament’s summer vacation break.

Following a lower chamber debate, 183 lawmakers opposed the ban, 162 voted for it and two abstained.

The nonbinding proposal had been put forward by the leading opposition Popular Party, which portrayed it as a measure in support of women’s rights. The ruling Socialist Party opposed the ban.

“It is very difficult to understand how it is that our troops are defending liberty in Afghanistan and the government doesn’t have the courage to do so here, in Spain,” said opposition spokeswoman Soraya Saenz de Santamaria in Parliament.

Some analysts had interpreted the proposal as an opposition ploy to build their party’s strength amid the economic turmoil and dismal growth prospects that have dogged the government of Jose Luis Rodriguez Zapatero.

None of the opposition spokesmen consulted had been able to cite a place in Spain where women routinely wear face-covering veils.

“This has been used politically in a search for electoral support,” said Mansur Escudero, president of the Islamic Commission of Spain. He said he last saw a woman wearing a burqa in Spain 10 years ago in the southern city of Marbella, where Saudi Arabia’s royal family and other wealthy Arab clans own large homes and estates.

Escudero said the woman could have been a tourist. The only woman he knew who regularly wore a burqa had lived in the southern city of Cordoba and died about a decade ago.