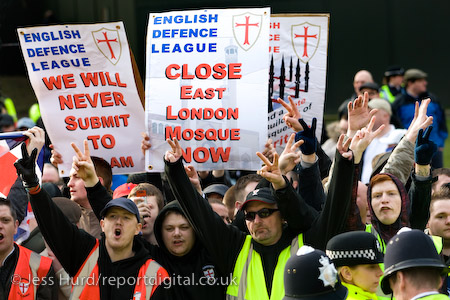 “As we confront the fascist thugs of EDL we in the Bengali and the Muslim community are being asked to stand side by side with Islamic Forum in Europe (IFE). This we refuse to do.”

As Tower Hamlets gears up for a united protest against the English Defence League, a motley collection of malicious, sectarian idiots has chosen this moment to mount a public attack on the IFE and the East London Mosque, bracketing them along with the EDL as fascists.

Note that many of the signatories to this ill-written diatribe aren’t even part of the Bengali and Muslim community anyway. They include the drunken thug Terry Fitzpatrick, currently on bail facing a charge of racially aggravated harassment following a complaint to the police by Simon Woolley of Operation Black Vote. Then there is Gita Sahgal, who broke with Amnesty over its links with Cageprisoners, and has headed a right-wing campaign against her former employers while promoting crackpot conspiracy theories to justify her participation in the witch-hunt.

And where would a statement like this be without the support of the contemptible Jim Fitzpatrick MP? This is the man who insulted the couple who invited him to their (gender-segregated) wedding at the London Muslim Centre by denouncing them to the press and whose most recent contribution to community harmony has been to condemn the organisers of Sunday’s protest for “stirring up fear and anger”.

True, this disgraceful statement has been signed by some members of the Bengali community in East London – indeed, it was organised on behalf of the laughably misnamed Unity Platform Against Racism and Fascism from the Bangladesh Welfare Association off Brick Lane.

One such signatory is Ansar Ahmed Ullah, who worked with Andrew Gilligan on “Britain’s Islamic Republic“, the Channel 4 documentary that provoked the EDL’s threat to demonstrate in the East End in the first place. And, after the programme was condemned in a letter to the Guardian by a wide range of progressive figures, Ullah collected signatures for a letter defending Gilligan’s witch-hunt. Last year he collaborated with Observer journalist Nick Cohen in another attack on the East London Mosque, complaining bitterly about the government’s willingness to consult its leading figures. “They never want to talk to people like me,” he whinged. Well, perhaps that’s because the East London Mosque is attended by some 10,000 people a week and represents serious forces within the community – whereas Ullah represents, shall we say, rather less.

Other signatories are associated with the Awami League, currently the governing party in Bangladesh. As the statement makes clear, their primary interest is in settling scores over disputes within Bangladeshi politics, going back to the liberation war nearly four decades ago, without any concern for the impact their actions have on politics in East London today.

This is not only unprincipled but monumentally stupid. By breaking the united front against the far Right, these self-proclaimed “secular” forces within the Bangladeshi community are playing with fire. The Brick Lane Mosque, with which the Bangladesh Welfare Association is connected, has itself been witch-hunted by Islamophobes over its recently-built “minaret”. What will they do if the EDL turns its attention to them? Blinded by their hatred of Jamaat-e-Islami, they fail to see – or do not care – that their sectarian actions will stoke the fires of Islamophobia and that, whatever short-term advantages they may gain over their rivals in the IFE, in the long term all sections of the Bengali Muslim community will pay the price.

The IFE’s response to the Unity Platform Against Racism and Fascism statement can be read here.

Update:  Over at The Spittoon, the Unity Platform statement is hailed as “An amazing show of grassroots unity in Tower Hamlets against the forces of fascism that seek to dominate it – be it the EDL, UAF or the IFE.” So, according to Faizal Gazi and his mates, not only IFE but also UAF are among the “forces of fascism”! Attempting to discredit the proponents of this sort of irrational nonsense would be entirely superfluous. They accomplish that task themselves without any help from us.