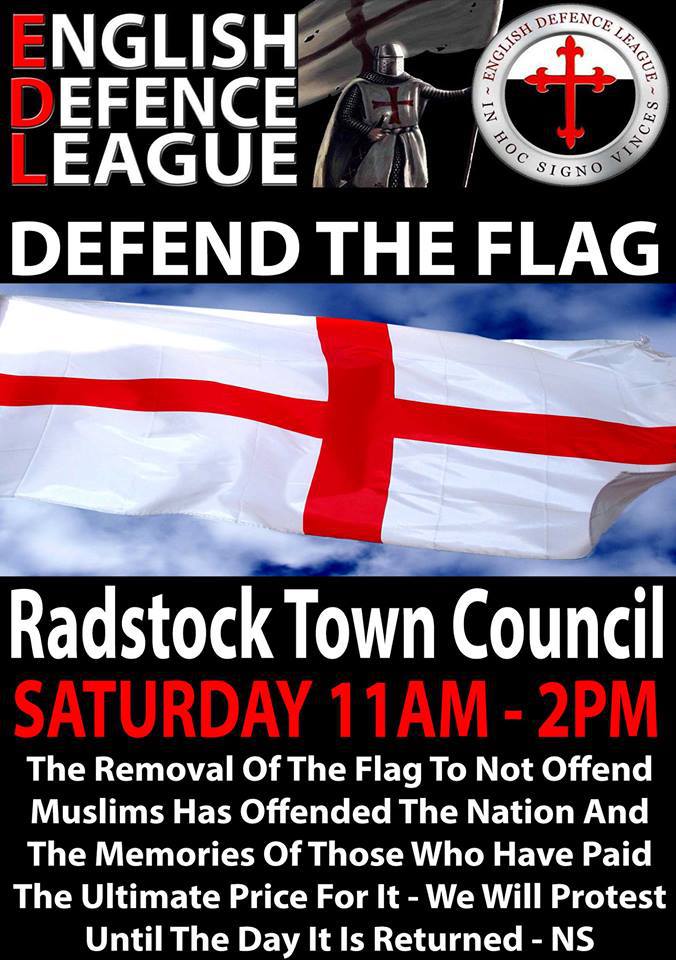 That’s the headline to a story that appeared in the Daily Mail yesterday.

The report concerns a debate by Radstock Town Council in Somerset over which flag to fly on Armistice Day on the town’s newly restored flagpole. The council confirmed an earlier decision to purchase a Union flag rather than a St George’s flag. According to the Mail‘s version of events, this decision was motivated by a concern not to offend the town’s small Muslim population.

The sole basis for this story is a quote from just one of the councillors, who during the debate opposed the purchase of a St George’s flag, allegedly stating: “My big problem is it is offensive to some Muslims, but even more that it has been hijacked by the far Right.” However, there is no evidence that this comment by a single individual played any significant role in the council’s decision.

The International Business Times spoke to council chairwoman Lesley Mansell, who explained: “We were presented a list of every flag we can fly as a local authority but the council agreed that we did not want to fly all of them and simply wanted to purchase our own Union Jack. The statement made by one councillor regarding the St George’s flag was not really taken into consideration.”

True, the Mail quotes Rizwan Ahmed of the Bristol Muslim Cultural Society and Nasima Begum of the Muslim Council of Britain as saying that Muslims have no objection to the St George’s flag. But the whole purpose of the report is to whip up the indignation of the Mail‘s readers over yet another fraudulent “Muslim appeasement” story.

Once again we have the mainstream right-wing press feeding the “Islamification of Britain” paranoia that inspires the far right. Predictably, the English Defence League has announced that it will be holding a demonstration in Radstock tomorrow, in order to demand the “return” of a flag that has in fact never been removed.

Update:  ITV reports that EDL supporters “from as far away as Newcastle” attended the Radstock protest. Judging from the pictures, this didn’t exactly result in a mass demonstration.