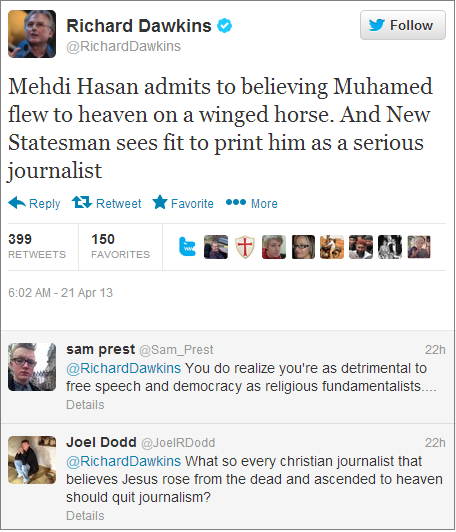 Dawkins’ comment, tweeted yesterday, is a belated response to this article published in the News Statesman last December.

See the report at the Huffington Post and also at the Guardian, where
Andrew Brown writes:

“It is of course horribly unfair to call Dawkins a bigoted racist Islamophobe. Anyone who follows him knows he is an equal opportunities bigot who is opposed to Christians of every colour as well. But if you will tweet, as he has previously done, that ‘I have often said that Islam is the greatest force for evil in the world today’, then us inferior, less rational types can easily suppose that he means what he says, and that therefore he does think that Muslims, especially proselytising ones like Mehdi Hasan, are spreading evil and should not be employed by respectable magazines.”

Except that Dawkins isn’t “an equal opportunities bigot who is opposed to Christians of every colour”. He describes himself as a “cultural Christian“, although what he really means by this is that he is a cultural Anglican (he holds that Roman Catholicism is “the world’s second most evil religion“). So Dawkins wouldn’t in fact have a problem with the New Statesman publishing an article by someone who believes that Jesus rose from the dead and ascended to heaven – as long as the journalist was a member of the Church of England.