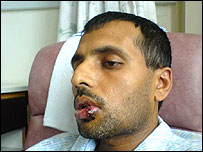 Beaten… for being Muslim: Sickening attack on a family man

THIS is the battered face of a Muslim man beaten unconscious in a racist attack as he walked to morning prayers.

Assistant imam Mohammed Naeem was attacked after being racially abused on his way to Rhyl’s Islamic Cultural Centre in Water Street. He was punched mercilessly and left unconscious, bruised, bleeding and needing 15 stitches in his mouth.

He also lost two teeth in the attack, which happened at about 2.30am last Wednesday – just two days before the first anniversary of the London bombings. He was taken to Ysbyty Glan Clwyd, Bodelwyd-dan, for treatment.

The 29-year-old family man, who has a wife and three children, was yesterday still recovering in hospital following the horrific attack by two men. Last night outraged Muslim leaders appealed for anyone with information to contact police.

North Wales spiritual leader Imam Awad Kareem said he was horrified by the assault and urged people to unite together. He said the mosque assistant was approached by two men who made racist comments before beating him.

“My assistant was on his way to the centre early in the morning when he was approached by two young men,” he said. “He had been washing up at a local restaurant and was walking to the centre to take the morning prayers. They asked him if he was Muslim and he replied yes.

“One said: ‘If you want to live or stay in this country you should not be a Muslim.’ Immediately he was beaten to his mouth and face. He was hospitalised and needed 15 stitches in his mouth. He is a family man. His mouth was left in a bad state. He was beaten unconscious. He could hardly speak.”

The 29-year-old victim left hospital after the attack in Rhyl, Denbighshire, but was re-admitted after his condition worsened. The mosque cancelled services after the assault.