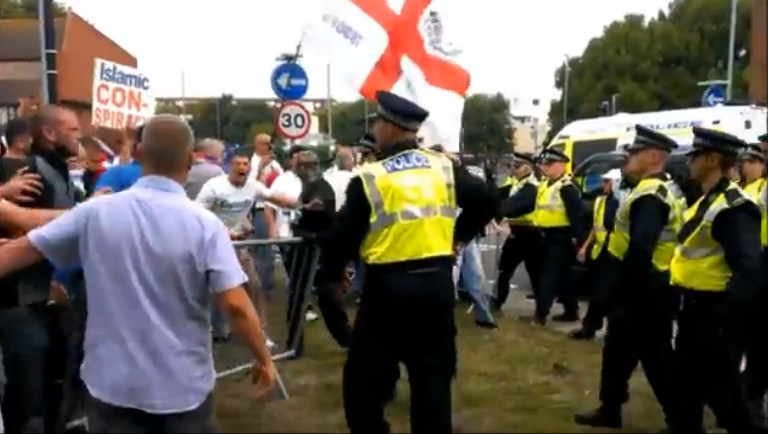 Demonstrators today staged a protest march against a Muslim school opening in Portsmouth.

The English Defence League organised the march, saying it wanted to show disapproval of the Madani Academy, in Buckland, which is expected to open later this year. The Madani Academy would be the first Muslim school to open in the city. It will teach the national curriculum to five to 16-year olds, which will be tailored to Islamic values and teachings.

The protesters gathered outside the Connaught Arms at 1pm. They walked along Fratton Road and stopped outside the school, on the opposite side of the road, on the corner of Manor Road. A counter march by the Unite Against Fascism group was held, with their supporters being kept separate by police on the opposite corner of the road. EDL supporters knocked down crowd control barriers and surged forward as abuse was hurled between the two factions.

The EDL protesters said they fear that allowing the school to open would not promote integration and would set a precedent for other schools to follow.

Paul Pitt, from the South East Alliance, said: “I think it has gone alright, apart from two arrests for very minor things. If you look at what we have suffered in recent times, with the death of Lee Rigby and the lack of integration, we are storing up trouble.

A counter march by the Unite Against Fascism group was held, with their supporters being kept separate by police on the opposite corner.

Some EDL marchers let off fireworks along the walk, and one person was arrested for throwing one at a police officer. Another man was arrested for being drunk and disorderly, although the march passed without significant disorder.

A Hampshire Constabulary spokesman said: “We’d like to thank the local community for their patience whilst this took place today. Officers will maintain a visible presence in the city centre tonight to ensure that peace is maintained and everyone can enjoy their Saturday night. Have a very good evening.”

Also “Portsmouth EDL March: a bit of a damp firework”, Pompey Against the Nazis, 18 August 2013