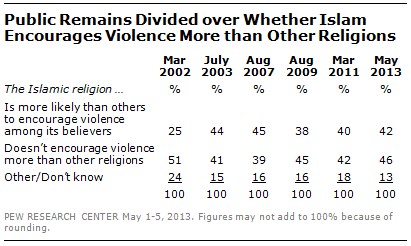 The public’s views of whether Islam is more likely than other religions to encourage violence have changed little in the aftermath of the Boston Marathon bombings.

The new national survey by the Pew Research Center, conducted May 1-5 among 1,504 adults, finds sizable demographic and religious differences in attitudes toward Islam and violence. And the partisan gap is as large as ever: 62% of Republicans say that Islam encourages violence more than other religions, compared with 39% of independents and just 29% of Democrats.

The survey also finds that Muslim Americans are seen as facing more discrimination than some other groups in society, including gays and lesbians, Hispanic Americans, African Americans and women.