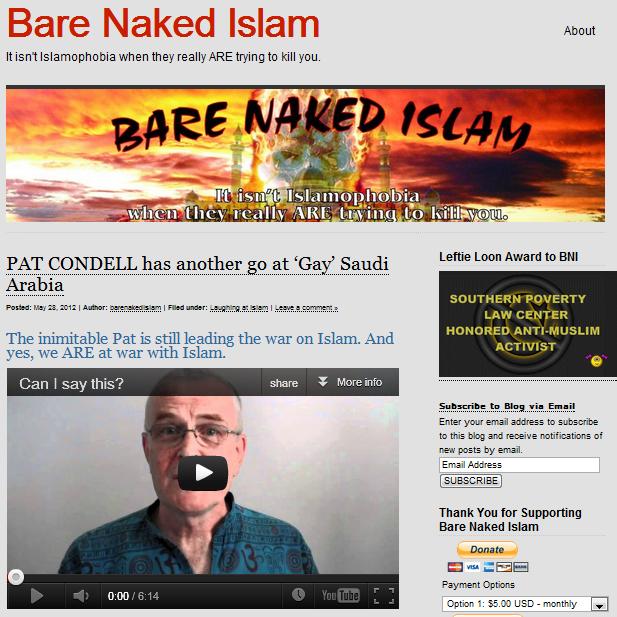 Pat Condell, the National Secular Society’s favourite comedian (he has been repeatedly nominated for their Secularist of the Year award, although he has yet to win it) has long had a fan base among the Islamophobic right in the United States. He has recently acquired a new admirer. It’s none other than Bonni Benstock-Intall of the hate site Bare Naked Islam, which achieved notoriety last year for its promotion of violence against Muslims and attacks on mosques. Over the past year or so Bare Naked Islam has repeatedly posted Condell’s videos and hailed him as a fellow anti-Muslim bigot.

I get the impression that even the National Secular Society has begun to find Condell a bit of an embarrassment. The NSS no longer loudly proclaims Condell as a member, urging everyone to watch his Islamophobic videos and pouring scorn on critics who characterised his anti-Muslim diatribes as hate speech. Given Condell’s repeated rants against immigrant rapists, that is hardly surprising. By any standards the material Condell produces these days can’t be categorised as anything other than incitement to hatred, as his enthusiastic endorsement by Bare Naked Islam makes clear. But we’ve yet to hear any leading figure in the NSS dissociate the organisation from Condell or withdraw its earlier declarations of support for him.