Ahead of Friday’s terror attacks in Norway, Norwegian police intelligence had warned of rising activity in far-right and anti-Muslim extremist groups, but didn’t view it as a major threat to Norway.

The man charged in the attacks, which killed at least 92 people, has been identified in media reports as Anders Behring Breivik, a 32-year old with right-wing extremist and anti-Muslim views.

The Norwegian Police Security Service, or PST, in an annual threat assessment published in March, said “a higher degree of activism in groups hostile to Islam may lead to an increased use of violence.” PST also noted an “increase in the activity of far-right extremist circles in 2010,” and said, “This activity is expected to continue in 2011.”

However, the security service viewed Islamist extremism as a larger threat and concluded that far-right fringe groups or individuals wouldn’t constitute a major threat against Norwegian society.

The rhetoric on immigration and Islam in Norway has become harder in some fringe groups, Kari Helene Partapuoli, director of the nongovernmental Norwegian Centre against Racism, told Dow Jones Newswires.

Although the suspect’s online postings seem to express views largely consistent with anti-immigration right-wing movements, the apparent targeting of the Labor Party sets him somewhat apart, she said. “I think he views them as a party which represents multiculturalism,” she added.

She noted that the extreme-right movement in Norway is small and lacks the kind of organization it has in several other European countries, including neighboring Sweden. The lack of leading figures was also cited by PST as a factor hampering the growth of organized right-wing extremism.

Ms. Partapuoli noted that the discussion on immigration has been less prominent in Norway than in many other European countries. “We have seen relatively less of it in Norway; it has never been like in Denmark and Netherlands with their big debates about how multiculturalism has failed,” she noted.

“In that movement, they do label social democrats weak and naive, but this kind of hatred is not commonplace,” she said, adding that in his online rhetoric, the man “calls just about everyone who doesn’t agree with him a ‘Marxist’.” “I think he views them as a party which represents multiculturalism and this ‘Marxism’ threatening Norway,” Ms. Partapuoli said.

Breivik’s hatred of the Labour Party certainly didn’t set him apart from the English Defence League, an organisation for which he expressed his admiration. When the EDL was founded, a Labour government was still in office in Britain and EDL propaganda consistently vilified Labour for having supposedly sold out to Muslims, as the placards below illustrate. They are from the first Dudley protest which took place in April 2010, in the run-up to the general election. 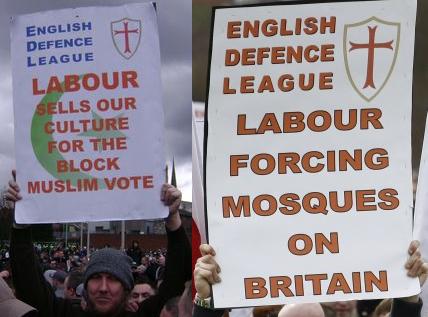