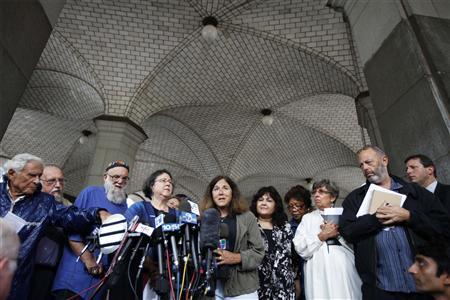 Muslim, Jewish, Christian and civic groups formed a coalition on Wednesday to back a plan for a Muslim center near the site of the World Trade Center attacks in New York that has sparked heated national debate.

The cultural center and mosque face fierce opposition from conservative politicians and people who consider its location insensitive to families of the nearly 3,000 people killed in the September 11 attacks by al Qaeda militants in 2001.

But the newly formed New York Neighbors for American Values, made up of more than 40 religious and civic groups, said the debate was creating fear and division and that it would fight for U.S. constitutional freedoms to be upheld.

“We were not attacked by the Muslim world,” said Donna O’Connor, spokeswoman for September 11th Families for Peaceful Tomorrows, whose pregnant daughter was killed in the World Trade Center attacks. “We 100 percent fully support the Islamic cultural center in New York City.”

“We reject the refrain of ‘freedom of religion but not in my backyard,'” Donna Lieberman, executive director of the New York Civil Liberties Union, told a news conference to announce New York Neighbors for American Values.