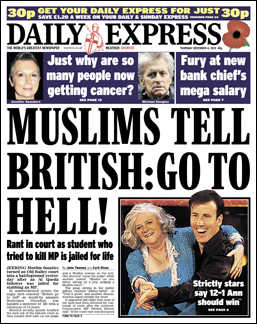 Thus the front-page headline in the Daily Express.

The report has produced the intended reaction, judging by the comments that follow it:

“Cultural enrichment … don’t you feel so much better for it ??”

“The bleeding heart liberals are the cause of all this.”

“Only in Britain could this madness happen, where we are funding the source of our own destruction.”

“Perhaps this low life should get his benefits stopped for deceiving the authorities. Won’t happen of course, can’t be seen to be upsetting the non-integrating squallor-living supporters of terrorism”

“Well done Labour you most be so proud of your Multiculturalism.”

“And YOU who keep voting for the Lib/Lab/Con are to blame! – Joe Bloggs, In the hell that was once England”

“where are all the other ‘Moderate’ muslims (If there is such a thing) who we never hear speaking out against these anti-british lunatics?”

“This is typical of modern Britain. We invite the dregs of the world to our shores, those that want to murder the citizens of this nation and we pander to their every whim. We house them, feed them but still we invite more and more….”

“If Islam is so fantastic they should take the first flight to the nearest Islamic Republic. Enough of appeasing these people.”

“In a strange sort of way, these people should be admired. Why? Because they stick rigidly to their beliefs. Unlike the Judge and Police, who through fear bend over backwards to please them. And that’s why the battle is already lost. So we must all get used to a future Islamic Britain.”

“These vile scum SHOULD have been arrested and brought to trial for their stinking little antics …….IF IT WERE WHITE ANGLO SAXONS RANTING IN THIS WAY YOU CAN BE SURE THAT WOULD HAVE BEEN THE CASE !!!!!!!”

“Sick people? sick religion yet they take money from us all.”