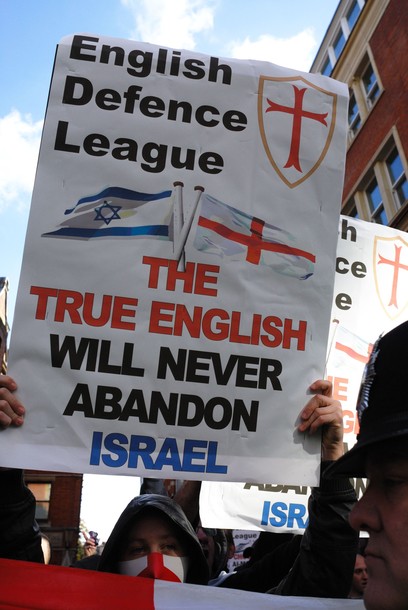 The Home Office has written to an umbrella group representing a range of Jewish communal and religious groups in response to statements distancing themselves from the methods and aims of the English Defence League.

Earlier this year the leaders of the United Synagogue, Reform, Liberal and Masorti communities, as well as the Board of Deputies and the Spanish and Portuguese Jews’ congregation, highlighted their opposition to the EDL’s tactics and called on the far right organisation to refrain from using Jewish and Israeli symbols in its campaigns.

Under the umbrella of the Council of Imams and Rabbis of the Joseph Interfaith Foundation, they rejected in particular the EDL’s “efforts to incite hatred and antagonism in our society”, its attempts to “foment violence” and “drive a wedge between the Jewish community and our Muslim neighbours”.

They attempted to draw a line under the EDL’s efforts to attract Jewish membership, which reached a peak with a rally “to oppose Islamic fascism” outside the Israeli embassy last year where EDL members waved Israeli flags. The EDL has a “Jewish Division”, but it has been beset by infighting and is understood to have only a handful of Jewish members.

James Brokenshire, the Home Office Minister responsible for policy regarding the EDL, has now sent a letter of response to Mehri Niknam, director of the Council of Imams and Rabbis.

“We welcome your positive action to counter the divisive influence and minimise the impact of EDL activity,” he said. “As a government our position is clear, we will not tolerate groups like the EDL who spread hate, seek to divide us and deliberately raise community fears and tensions.”

He said the government would continue to condemn the EDL’s views and actions when necessary and work with police and local agencies. Mr Brokenshire added that the government trusted local agencies to “put in place suitable local measures to counter the influence and minimise the impact of EDL activity. We stand ready to provide advice and support where it is requested.”