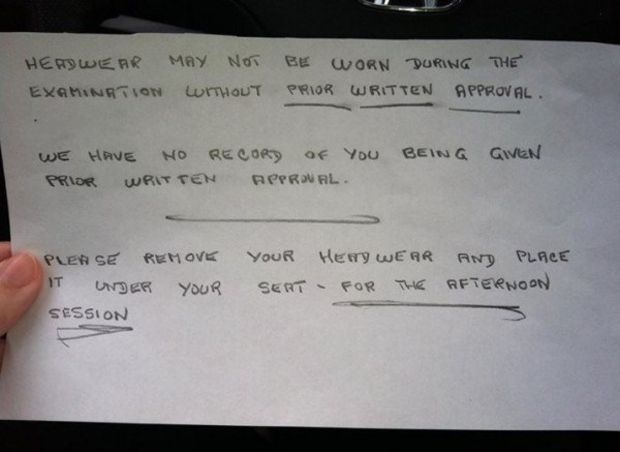 On Wednesday and Thursday, law school graduates aspiring to practice in the Commonwealth gathered in Boston and Springfield to take the 16-hour bar exam, broken into several parts. During the morning portion of the test Thursday, recent graduate of the University of Michigan Law School Iman Abdulrazzak was handed a note from an exam proctor asking her to remove her headscarf.

As many Muslim women do, Abdulrazzak wore a hijab, covering her head and chest, during the exam held at the Western New England University School of Law. The note, written in capitalized block letters read, “Headwear may not be worn during the examination without prior written approval. We have no record of you being given prior written approval. Please remove your headwear and place it under your seat for the afternoon session.”

While “headwear including hats, scarves, caps, hoods, bandanas, visors, costume headgear or sunglasses” are prohibited from the examination room, religious headwear is permitted. “Headwear that has been granted prior approval by the Board of Bar Examiners for religious or medical reasons only,” according to the Massachusetts Board of Bar Examiners’ security policy. Such religious headwear includes Jewish yarmulkes, Muslim hijabs and Sikh dastars.

Though it is clear that prior approval is needed for headwear, Abdulrazzak said her request to wear the hijab was approved Monday. Additionally, it is unclear why the proctor gave her the note during the exam instead of waiting until the lunch break. During the break for lunch, Abdulrazzak called the Bar office to request she be allowed to take the exam in the afternoon with her hijab on.

Executive Director of the Massachusetts Board of Bar Examiners Marilyn Wellington told law news website Above The Law the issue was resolved quickly. “This was an unfortunate miscommunication,” Wellington said. “We withdrew the request that she make adjustments to her headgear, and she wore her religious garments throughout the entire testing day. The miscommunication was corrected as soon as we were made aware of it.”

Though Abdulrazzak was allowed to finish the bi-annually offered exam, she remained upset. Sharing the photo on social media, she wrote in the caption, “Trying hard to control how upset I am.”

“I spent Monday getting authorization to wear a head scarf. I was already bothered Massachusetts even required such a formal process for wearing it,” she wrote. “Still I did. And made three phone calls to make sure I was all set. Still, they decide to take up the matter WHILE I’m taking the exam instead of waiting until the break,”

She ended on a sarcastic note, “Fun times living in the stone age.”