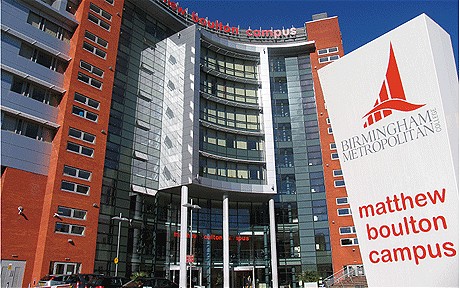 Angry Muslim students have hit out at college chiefs after being banned from wearing religious veils for “security” reasons.

All students, staff and visitors to Birmingham Metropolitan College have been told to remove any face coverings so individuals are “easily identifiable at all times”. But the controversial ban of the niqab – a veil that leaves only a slot for the eyes – has sparked fury among some Muslim girls, who say they are being discriminated against.

The policy was revealed just days after politicians discussed banning the burka. Kettering MP Philip Hollobone – who refuses to see constituents who will not lift their veils – raised the issue in a Private Member’s Bill, saying it “goes against the basic part of the British way of life”.

News of the policy at the Birmingham college was broken to one prospective Muslim student at the start of the new term last week. The angry 17-year-old girl, who did not want to be named, said:

“It’s disgusting. It is a personal choice and I find it absolutely shocking that this has been brought in at a college in Birmingham city centre when the city is so multicultural and so many of the students are Muslim. It upsets me that we are being discriminated against. I don’t think my niqab prevents me from studying or communicating with anyone – I’ve never had any problems in the city before.”

The teenager was so upset at the policy that she says she decided to look for another college place in the city.

Hoodies, hats and caps have also been banned at the college, which was formed after the merger of Matthew Boulton and Sutton Colfield colleges. Principal and chief executive Dame Christine Braddock DBE, said the policy had been in place for some time and had been developed to keep students safe.

She said: “We have a very robust Equality, Diversity & Inclusion Policy at Birmingham Metropolitan College but we are committed to ensuring that students are provided with a safe and welcoming learning environment whilst studying with us.

“To ensure that safeguarding is a priority, we have developed our policy alongside student views to ensure we keep them safe. This needs individuals to be easily identifiable at all times when they are on college premises and this includes the removal of hoodies, hats, caps and veils so that faces are visible.

“All prospective and progressing students, as well as staff, have been advised of the policy, which will mean everyone allowed on the premises can understand and know each other in a safe environment.”

But another student at the college, Imaani Ali, 17, said her “freedom has been breached” by the rule. “Me and another friend who wears the veil were only told we wouldn’t be allowed inside the college after we had enrolled,” the applied sciences student told the Mail.

“They haven’t provided us with another alternative. We said we would happily show the men at security our faces so they could check them against our IDs, but they won’t let us. It’s a breach of my freedom and I feel discriminated against. This is my religion, it is what I believe in. I don’t really want to go to a place that doesn’t accept me but I have no choice now.”

But other students at the college – which has several campuses across the West Midlands including the former Matthew Boulton city centre facility – agreed with the ban. Chante Young, 17, who is studying business, said: “You don’t know who is underneath it. You can’t see any of their face – only their eyes.”