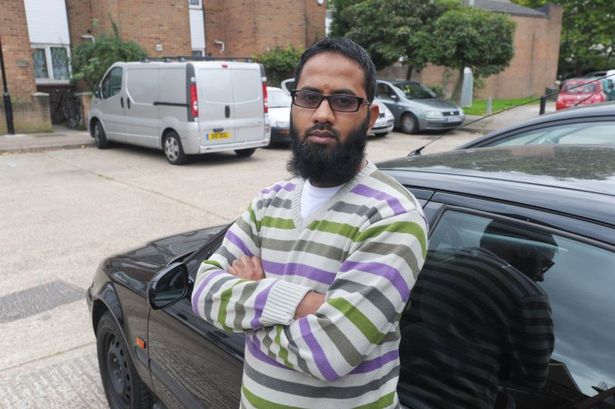 A spate of racist vandalism has hit Brentford in recent weeks sparking local condemnation. The crimes started when a shocked father found his number plate defaced and a racist note on his car claiming to come from the English Defence League.

Muhammed Abu Sayed Ansarey went to his Honda Civic in the public car park in Coates Walk, Brentford, on September 28 to find a note under his windscreen wiper telling him to “park in your own car park at the top or else”, accompanied by racist swearing and signed off supposedly from the English Defence League (EDL) and British National Party (BNP). His car number plate also had permanent marker pen on it joining up letters and numbers to form different ones.

The 34-year-old chairman of the West London Muslim Centre in Isleworth is a blue badge holder because he has poor mobility due to a tumour in his leg muscle. Originally from Bangladesh, Mr Ansarey has been in the UK for 11 years and has lived just off Ealing Road in Brentford for the past six years with his children and wife. He is also a campaigner for the Hounslow Labour Party and runs the Arabic School at Hounslow Jamia Masjid and Islamic Centre.

He said: “I was rushing to my work place and went to my car where I normally park and I found this racist note on my car. I was embarrassed when I read it because my children were with me. I was really shocked and frustrated by it, and they had also damaged my car. They took the Honda sign off and defaced my number plate which not even the car wash could remove.

“I called the police straight away, the officer was really, really helpful but I’m utterly shocked and depressed by this. I think they may have targeted us because we wear long religious clothes when we go to pray and my wife wears a head scarf but at the West London Muslim Centre we are open to everybody, of any religion and race.

“Councillor Ruth Cadbury and our MP, Mary Macleod, have both come along. We’re always peaceful people and don’t get involved with extremism and radicalism.”

The BNP responded furiously to the news their name was being used in conjunction with racism. A spokesperson said: “It’s definitely not from the BNP because racism is illegal in this country. We are a political party and not in the habit of racially abusing members of the public. We have members who are mixed race and in mixed race relationships. The EDL is not a political party so we cannot be lumped in with them.”

Just a week after Mr Ansarey’s incident, several members of the public reported grafitti in Lion Way, Brentford, where a wall was emblazoned with “EDL” and the street sign had been altered to say “3 Lions Way”, referring to the crest on England football shirts.

Brentford councillor, Ruth Cadbury expressed her sadness and anger over the two incidents following many years without racist activity of that nature.

She said: “We cannot let this abhorrent behaviour go unchallenged. I have been heartened by the support of the local police, and the speedy clean up by Hounslow Highways in Lion Way. The Brentford Safer Neighbourhood team panel will be discussing it at their meeting this week. I would urge local residents to report any incidents they see to the police, their local councillors and Hounslow’s hate crime team.”

The police are currently investigating both incidents.

The EDL did not respond to the Chronicle’s request for a comment.