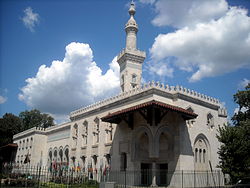 The National Islamic Center in Washington DC is an imposing building with a towering minaret. One of America’s iconic mosques, it is surrounded by the flags of the Islamic countries which helped pay for its construction in the 1950s.

Its design was influenced by classical and traditional architecture in Egypt. Akbar Ahmed, a professor of Islamic Studies at American University in Washington DC and one of the world’s leading experts on contemporary Islam, says it would be impossible to build such a national mosque today because of the controversy it would arouse.

“It’s a bad time for Islamic architecture,” says Mr Ahmed, former Pakistani ambassador to the UK. “If there was some visionary with money who wanted to build the Taj Mahal in the US, he’d be attacked as a stealth Jihadist.”

Mr Ahmed says he sympathises with attempts to modernise Islamic architecture and to create mosques that are more in keeping with American culture.

“For non-Muslims [the mosque] has become the symbol of Islam and therefore a target,” he says. “Therefore, the building of a mosque is not just the innocent putting together of brick and mortar. It signifies a debate taking place in the US about Muslim identity and about American identity.”

The Muslim community is feeling very much under siege, he says. “I understand why Muslims would be very reluctant or hesitant to make a mosque that looks like a traditional mosque, which they could have done comfortably in the USA a few decades ago,” he says. “That, in a sense reflects where America is today.”