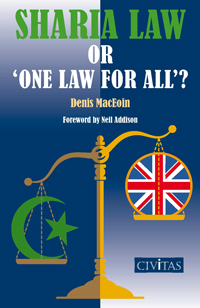 At least 85 Islamic sharia courts are operating in Britain, a study claimed yesterday. The astonishing figure is 17 times higher than previously accepted.

The tribunals, working mainly from mosques, settle financial and family disputes according to religious principles. They lay down judgments which can be given full legal status if approved in national law courts. However, they operate behind doors that are closed to independent observers and their decisions are likely to be unfair to women and backed by intimidation, a report by independent think-tank Civitas said.

The Civitas study said the Islamic courts should no longer be recognised under British law. Its director Dr David Green said: “The reality is that for many Muslims, sharia courts are in practice part of an institutionalised atmosphere of intimidation, backed by the ultimate sanction of a death threat.”

The Muslim Council in Britain condemned the study for “stirring up hatred”. A spokesman said: “Sharia councils are perfectly legitimate. There is no evidence they are intimidating or discriminatory against women. The system is purely voluntary so if people don’t like it they can go elsewhere.”

It comes as no surprise to find that the”expert” behind the Civitas report is our old friend Denis MacEoin, author of the notorious and discredited Policy Exchange report The Hijacking of British Islam.

We were about to suggest that if MacEoin wants to write fiction he should stick to his day job as a novelist, but apparently that hasn’t been going too well either.

Further update:  Predictably, MacEoin’s report finds favour with both the British National Party (“Get your sensational copy of Sharia Law or ‘One Law For All’? from Excalibur now!”) and the National Secular Society.