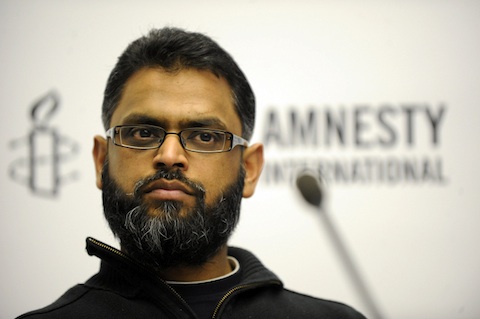 A well-travelled British human rights activist and former Guantanamo Bay detainee said he was barred from boarding a direct flight from London to Toronto Friday because of concerns the aircraft could be diverted to the U.S.

Moazzam Begg was supposed to speak at a Saturday conference on Islamophobia organized by the Canadian lawyer for Omar Khadr, 24, the Toronto-born Guantanamo prisoner who was convicted last fall of war crimes.

Begg said airline agents told him they had been in touch with Canada’s High Commission in London and the issue was one of security. “They said to me the reason why they would not board me and take me to Canada is because, in the unlikely event they were rerouted to America, there could be a security concern,” Begg said in a telephone interview with the Toronto Star.

Khadr’s lawyer, Dennis Edney, said a Canadian foreign affairs official informed him that Begg was denied entry due to a “U.S. policy”.