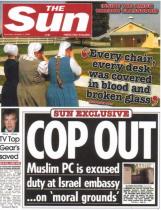 The media are trying to whip up anti-Muslim sentiment over the issue of Alexander Omar Basha, a Muslim police officer guarding the Israeli embassy in London who asked to be transferred to another post during Israel’s war on Lebanon, where he has relatives.

It’s not often this site has reason to endorse the views of a Tory member of the London Assembly, but we note that Richard Barnes blames senior officers rather than PC Basha. The Evening Standard quotes him as saying: “I think it was crass management in the first place. They should have recognised there could have been a problem and not suggested this officer be posted at this embassy.”

Another member of the Metropolitan Police Authority, Peter Herbert, has described the row as a “ridiculous fuss about nothing”. He added: “From a security point of view, the Met would be seriously criticised if this guy has relatives in Lebanon and his picture was used around the world to demonstrate the irony about having a Muslim defending the Israeli embassy in the UK.”

Glen Smyth, chairman of the Metropolitan Police Federation, which represents rank-and-file officers, said just one two-hour slot outside the embassy had been affected. The officer had not refused to do duties and had made a simple request which it was “fairly sensible” to grant, Mr Smyth said.

Postscript:  It turns out that PC Basha was never posted to the Israeli embassy in the first place, according to a statement by Deputy Commissioner Paul Stephenson.