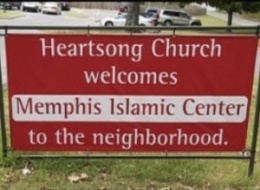 When pastor Steve Stone initially heard of the mosque and Islamic center being erected on the sprawling land adjacent his church, his stomach tightened. Then he raised a 6-foot sign reading, “Welcome to the Neighborhood.”

The issue for Stone and the 550-person Heartsong Church in Cordova, came down to one question: “What would Jesus do if He were us? He would welcome the neighbor,” Stone said.

The Memphis Islamic Center, a nonprofit organization formed three years ago, is two weeks from breaking ground on the first phase of a multimillion-dollar complex.

While the 4,000-square-foot worship hall is being completed, Heartsong has opened its doors to its neighbors throughout the monthlong observance of Ramadan. Under a gigantic cross constructed of salvaged wood, nearly 200 area Muslims have been gathering each night to pray. “I think it’s helped break down a lot of barriers in both congregations,” said Islamic center board member Danish Siddiqui.

“People in Memphis appreciate faith, even if it’s not their faith,” said Shaykh Yasir Qadhi, the Islamic center’s scholar in residence and a Rhodes College professor.

The peaceful tone in the Bluff City has been refreshing for Qadhi, 35, who recently moved to Memphis from Connecticut, where early this month his Bridgeport mosque was descended on by angry protestors yelling slurs at families as they arrived for evening prayer. “We’re living in a climate of Islamophobia,” he said.