A dad fears his family could have been killed in a suspected racist arson attack which left his three young daughters terrified.

North Wales Police launched an investigation after a garage at the back of Shafiul Islam’s house in Shotton was torched early on Tuesday morning.

Firefighters from Deeside were called out just after 6am after flames and smoke were spotted. And luckily the family were woken up by passers-by before the blaze spread to the house on Chester Road East.

An investigation into the cause was completed within hours – and confirmed it had been started deliberately.

Married Mr Islam – originally from Bangladesh – is restaurant manager at the nearby Bengal Dynasty, which is owned by his brother Monchab Ali. He was in the house with his wife Dilruba Aktar, 35, and their daughters Rawnak, 10; Samiha, seven, and three-week-old Safwana.

Mr Islam said his house was burgled earlier this year and fears the two incidents could be linked. But he says the two men responsible for the fire were caught on CCTV after he set up a home security system following the raid in mid-February.

At the neighbouring Esso garage opposite the Charlie’s Stores, one bystander said: “Someone came in about 6.15am and said there was a big fire next door. “I looked over and saw loads of flames spilling out – I couldn’t believe it.”

And the woman who reported the blaze to police, who did not want to be named, said: “It went up really quickly. One minute there were flames at one side of the house and the next there was fire on the other side. I knew straight away it wasn’t a normal fire. It was a heck of a blaze. The flames went as high as the top windows – way up. It was a terrible sight.”

A North Wales Fire and Rescue Service spokeswoman said two crews from Deeside Fire Station in Queensferry were sent to the scene.

A police spokesman said: “An investigation is under way into a fire which occurred at a garage belonging to a property on Chester Road East in Shotton. Police were notified of the incident at 6.06am. No-one was evacuated from the property and nobody was injured.

“The fire is being treated as suspicious. Police inquiries are continuing and detectives investigating are appealing to anyone who was in the vicinity and who may have seen anyone acting suspiciously at about 4am to contact officers at Mold CID on 101.

“Alternatively, individuals with information can also contact CrimeStoppers anonymously on 0800 555111.”

Mr Ali was behind plans to create an Islamic culture centre on the site of the run-down Shotton Lane Social Club in 2011, but the plans were shelved when the building was burnt down after an anti-Muslim march through Deeside by the far-right English Defence League.

No-one has ever been charged or arrested in connection with the blaze.

The destruction of the Shotton Lane Social Club in 2011 was openly celebrated by Casuals United, the football hooligan section of the EDL: 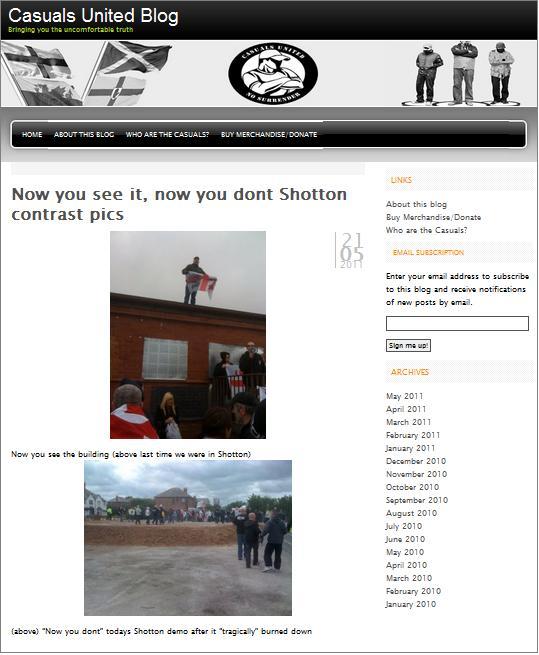