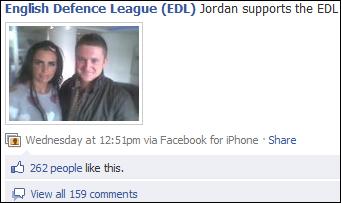 Jordan is furious after Far-Right extremists posted a picture of her on their Facebook site claiming she supported their views.

The 32-year-old unwittingly posed for the snap with a bloke she thought was a harmless fan while recording at the BBC. But the man was Tommy Robinson, the leader of anti-Islam group the English Defence League – which then uploaded the image to the group’s Facebook site, claiming Kate was a supporter.

She is said to be “horrified” and is fighting to take the snap down. A spokesman for Kate, in Boston, Lincs yesterday to promote her new book You Only Live Once, said: “She is not and will not be associated with the English Defence League. Kate had no reason to suspect he had any connection with any group.”

“Katie Price does not and will not be associated with the English Defence League in any way. Katie’s legal team are doing everything in their power to remove this picture from the website. She simply posed for a picture with someone who told her he was a fan, as she does on many occasions. She had no reason to suspect he had any connection with any group, and had she known she would have flatly refused.”