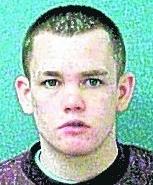 A racist thug who punched a taxi driver and dragged him along a street, has been jailed for 18 months.

Lee Preston, 22, targeted cabbie Mohammed Rashid, leaving him with two black eyes, a bruised face and grazes to his shoulders caused when he was dragged to the ground.

Mr John Hallisey, prosecuting, said the cabbie received a call at 9pm on April 16 to collect five men from Chaddesden. He noticed they were carrying cans of lager and told them these could not be drunk in his vehicle. But after a few minutes, the men started drinking. “Mr Rashid told them to stop and the response was to start hurling abuse. The defendant was saying ‘we are EDL,’ referring to the English Defence League,” said Mr Hallisey.

Preston, of Walbrook Road, Derby, began to throw beer cans out of the taxi until Mr Rashid closed the windows – a move which angered the passengers. Mr Rashid stopped his cab and told the five to leave. One said: “Get out and we’ll sort you out.”

When they eventually left, they failed to close the rear doors but Mr Rashid waited until he thought they had walked away before getting out of the cab. But he was then grabbed and prevented from getting back into the vehicle before being attacked.

During this, he heard chants of “EDL” and one man said: “I’m going to kill you.” When a second taxi driver stopped to help, he was also assaulted and had his vehicle kicked. Police were called and Preston was found hiding under a bush.