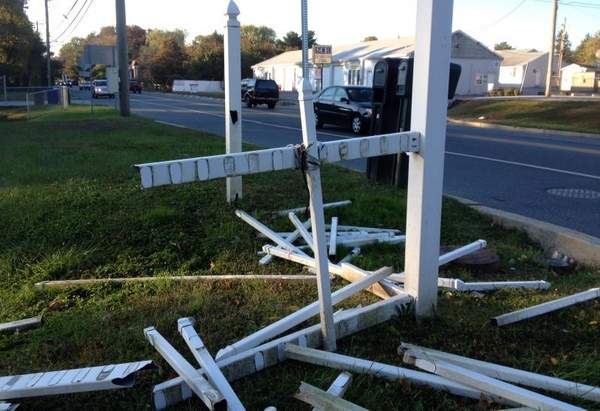 Word of the arrests surfaced as Delaware residents of many faiths gathered for a prayer service at the Islamic Society’s multi-purpose hall in a show of community solidarity.

Among them were Jews, Christians and Sikhs who spoke to the crowd. They each said they value interfaith efforts in Delaware, and that the incident would spark renewed commitment to teaching the community about religious tolerance.

The damage was discovered Friday morning as members arrived at the mosque on Salem Church Road. The main sign identifying the Islamic Society of Delaware was knocked down, a digital sign was damaged with rocks and a white picket fence was broken into pieces, with a cross made of some broken fencing.

Although a makeshift cross was part of the vandals’ work, police did not add a hate crime to the charges leveled Monday. Each of the three youths was charged with felony criminal mischief resulting in damage of more than $5,000, and each was charged with second-degree conspiracy, Sgt. Paul G. Shavack said.

Authorities did not consider the crude construction of a cross – typically considered a Christian symbol – to be proof that the incident was an anti-Islamic or religion-motivated vandalism spree, he said. “We have no evidence that it was a hate crime,” Shavack said.

“After a thorough and comprehensive joint investigation by the Delaware State Police and FBI,” he said, “there was no evidence to suggest that this act of vandalism was directed, targeted or focused on the Islamic Society of Delaware or the Islamic community.” Rather than a hate crime, Shavack said, “it was a random act of stupidity by teenagers.”

A representative of the FBI, which joined the investigation, announced the arrests at the interfaith service at the Islamic Society’s hall, saying he wanted to let the community know to help alleviate fears.

One boy was committed to an undisclosed juvenile facility, lacking $2,000 secured bail, he said. The others were released on unsecured bail, one on $2,000, the other on $4,000. Police did not reveal what led to the different bail amounts.

All three youths, whose named are being withheld because of their ages, have Newark mailing addresses, according to Shavack. State police are not releasing their blocks or neighborhoods.

No details were released about what led to the vandalism, how the suspects were identified or the circumstances of their arrest.

Still, many who joined the outpouring of support in the wake of the vandalism spoke of the incident in terms of religious intolerance and bigotry.

Leaders at the mosque expressed gratitude for the “overwhelming” response of support from the community – police, religious leaders and elected officials.

Leaders of the mosque said the incident was the Islamic Society’s first trouble in its nearly 25 years at the site.

“Honestly, your attendance today is much appreciated,” said Sheikh Hadi, the mosque’s imam, said Monday night. “It means a lot to us as Muslims.”

U.S. Sen. Chris Coons and Lt. Gov. Matt Denn were among the crowd. A pastor from Westminster Presbyterian Church delivered a $1,000 check toward repair of the damages.

Earlier Monday, the executive director of the Philadelphia chapter of a Muslim civil rights organization visited Ogletown, where he and other interfaith leaders denounced the vandalism.

“This attack is far from unique in the often sad history of our country,” said Jacob Bender, president of the Council on American-Islamic Relations in Philadelphia. He cited attacks against synagogues, Catholics and the 1963 bombing of a black church in Birmingham, Ala., that killed four young girls.

Bender, who is not Muslim, said it was not for the Muslim community alone to defend itself against bigotry, “but the obligation of all Americans who believe in our cherished values of freedom, acceptance and mutual respect.”

Also speaking Monday afternoon were Allimulla; Sister Barbara Jean Brown, an Episcopal nun and director of the Interfaith Center based at the Lutheran Church of the Good Shepherd on Foulk Road; and Jeanne Swartz, a member of the Philadelphia Interfaith Walk for Peace and Reconciliation.

Swartz, who hosts students from the mosque who are learning English, said she abhorred that last week’s vandals left a sign that looked like a cross.

“To me and to true Christians, the cross is a symbol of the Lord’s saving act of love,” she said. “So it would never be used for hate.”

She said she will be praying for the vandals to repent.

Rabbi Yair D. Robinson, of Congregation Beth Emeth and president the Delaware Association of Rabbis, said when he was growing up in Cape Cod, his temple was vandalized three times. Each time it was frightening, he said, because it steals your sense of security.

The Islamic Society of Delaware serves not only the Muslim community, but also other communities in the state, Allimulla said at the noon gathering. He added they plan to continue doing so.

“This isolated incident will not deter us from our firm commitment to serve the people of Delaware,” he said.

The Interfaith Resource Center is also beginning to lay the groundwork to raise money to help pay for repair of the vandalism damage, said Brown, of the Interfaith Center.

As details are finalized they will be posted on the center website, www.interfaithresourcecenter.com, she said, so those interested in helping can check for updates.

The Rev. Bruce Gillette, co-pastor of Limestone Presbyterian Church, said the interfaith center is suggesting that faith communities include a message of “support and love” this weekend on signs in front of their buildings.

As an example, Gillette said, a message could say: “Love Your Neighbor, including people of all faiths.”

Gov. Jack Markell reached out to the president of the Islamic Society of Delaware last week, a spokeswoman said, because he was concerned about the community.

“Members of any religion, including the Islamic community, deserve to be able to freely express their faith in peace without fear, bias or violence,” he said in a statement Monday.