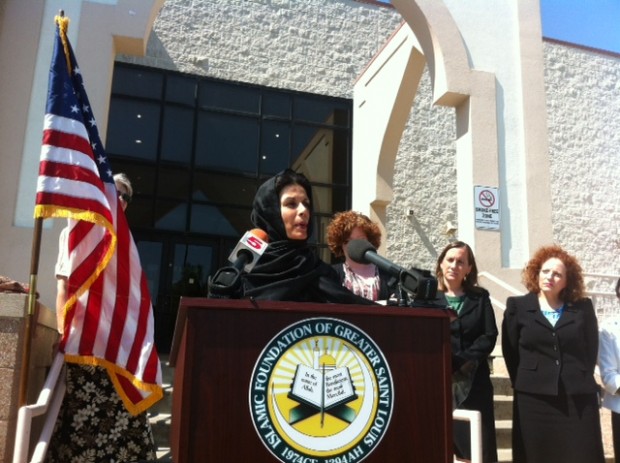 BALLWIN — Muslim, Christian and Jewish religious leaders joined civil rights leaders here this morning in denouncing recent attacks against mosques around the country. They say that kind of violence represents intolerance and a hatred of Muslims, and they worry it escalates during election season.

“This is a result of an atmosphere of hate that is being created by a small group of radical Islamophobes within this country,” said Faizan Syed, executive director of the St. Louis chapter of CAIR (Council on American-Islamic Relations). Ghazala Hayat, with the Islamic Foundation of Greater St. Louis, added: “We also see, usually the year of election, this rhetoric goes up.”

At a news conference, they were joined by Barbara Jennings, with the Coalition of Catholic Sisters; Rabbi Brigitte Rosenberg, president of the Rabbinical Association; and civil rights leaders including Brenda Jones of the ACLU of Eastern Missouri and Karen Aroesty of the Anti-Defamation League.

A July 4 arson fire damaged a mosque in Joplin, Mo., and a second fire on Aug. 6 destroyed it. The second fire has been labeled suspicious. An investigation continues.

The national group CAIR is offering a $10,000 reward for information leading to the arrest and conviction of whoever is responsible for the attempted arson on July 4. Syed said the group had planned Wednesday to announce an increase in that reward to include the Aug. 6 fire, but he said they would wait until officials confirm that it was arson.

Syed said the St. Louis group has contacted Islamic centers in Missouri, Arkansas, Kansas and Oklahoma to warn them to beef up security measures, during Friday prayers and other times. He said what happened to the mosque outside Joplin underscored the anger sometimes directed toward such centers. He said that mosque had been targeted even before the arson attempt in July. Shotgun shells had been fired at the center’s mailbox and people driving by had yelled profanities at children, he said.

Meanwhile, he said the mosque there will rebuild, thanks to a national fundraising campaign. He said about $400,000 had been raised in a short time, but that it will take close to $1.4 million to rebuild in or near Joplin. “We are really heartened by the response by non-Muslims to raise money so quickly,” Hayat added.