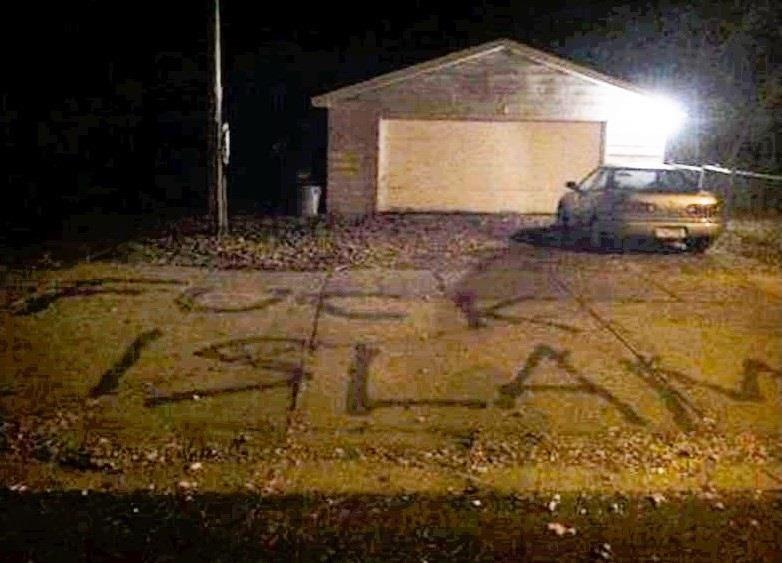 Someone used motor oil to paint an anti-Islam message in St. Paul’s West Seventh neighborhood, leading a civil liberties group Thursday to call on the FBI to investigate it as a hate crime.

The case led to strong condemnation from the neighborhood, including a resident contacting the Council on American-Islamic Relations, Minnesota (CAIR-MN).

The man reported someone had written “(Expletive) Islam” using motor oil near the driveway of a home, and said several Muslim families live in the neighborhood, according to Lori Saroya, CAIR-MN executive director.

St. Paul police received an anonymous call Oct. 28 at 3:26 a.m. about graffiti at Milton and Juno avenues. CAIR-MN contacted the FBI on Thursday.

The federal agency is aware of the incident, has been in consultation with the St. Paul Police Department and will continue to be, said Kyle Loven, a local FBI spokesman. “We’ll examine the situation to see it meets the threshold of a federal hate crime,” Loven said.

It’s not known whether the people who live in the house where the graffiti was scrawled outside in large letters are Muslim, Saroya said, though she noted that the message wasn’t necessarily targeting them. It was written to be facing out to the street and other homes. “That’s sending a message outwards into the neighborhood,” Saroya said. “It’s very concerning.”

A post on a neighborhood Facebook page about the case drew many comments, most saying the graffiti was unwelcome in the neighborhood. Residents tried to contact the people who live at the house where the graffiti had been left outside, and someone dropped off flowers.

People also hoped “it was some obnoxious kids and not something that suggested more heinous things were at work,” according to the man who initially posted about it. He deleted the post, which included a photo of the graffiti, after the city painted over the vandalism.

CAIR-MN has been in contact with St. Paul police, and has been told they’re investigating the case as a bias-motivated crime, Saroya said. “We are satisfied with everything they’ve done, but it’s been two weeks and we feel it needs more attention,” she said. “It’s such a serious issue, we need federal law enforcement to get involved and take a look at it as well.”

Saroya commended neighbors who spoke out against the vandalism. “It’s easy for people to say it’s none of their business and close their doors,” she said. “We really appreciate it when people stand up to hate and bias.”

CAIR-MN is asking anyone with information about solving the case to come forward.