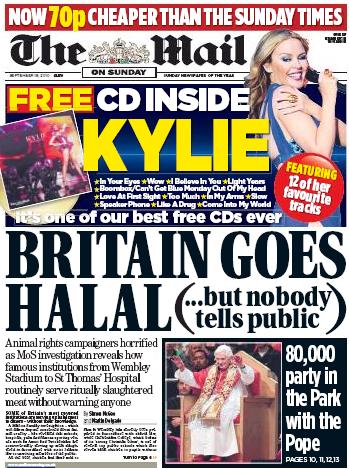 “A Mail on Sunday investigation – which will alarm anyone concerned about animal cruelty – has revealed that schools, hospitals, pubs and famous sporting venues such as Ascot and Twickenham are controversially serving up meat slaughtered in accordance with strict Islamic law to unwitting members of the public….

“Animal welfare campaigners have long called for a ban on the traditional Islamic way of preparing meat – which involves killing animals by drawing a knife across their throats, without stunning them first – saying it is cruel and causes unnecessary pain….

“The extent of halal meat consumption, even in areas of Britain with a very small Muslim population, was revealed as the Pope, on his first visit to Britain, expressed fears that the country was not doing enough to preserve traditional Christian values and customs.”

Yes it’s another piece of “Islamification of Britain” scaremongering in the Mail on Sunday, who adopt the pretence that they’re motivated not by hostility towards Muslims but by concern for animal rights, just as they frame their campaign against “sharia courts” in terms of a defence of women’s rights.

The fact that non-Muslims have for decades eaten halal meat in “Indian” restaurants (many of which are of course run by Muslims of Bangladeshi origin) without it ever becoming an issue for them is completely ignored.

And anyone who believes that opposition to ritual slaughter in the name of animal rights is necessarily progressive should check out the biography of Arnold Leese, to whom the present-day BNP can trace its organisational and ideological roots.

As for the Mail‘s sensitivity towards unnecessary suffering on the part of poor dumb animals, if the paper ever registered support for a ban on foxes being torn apart by packs of hounds it certainly passed us by.