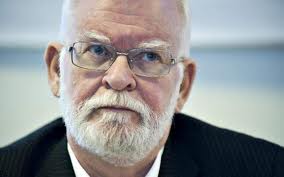 “Girls in Muslim families are raped by their uncles, their cousins, or their fathers”, and “When a Muslim man rapes a woman, it is in his right to do so”, were among the comments Hedegaard made during a 35-minute interview at a Christmas party with the author of the blog snaphanen.dk, who subsequently published the comments on the blog.

Today’s decision overturns a decision in January by the Frederiksberg District Court, which stated that while it found Hedegaard’s comments to be insulting, Hedegaard did not know that his controversial comments would be made public.

Last week Hedegaard published a book titled “Muhammeds Piger” (Mohammed’s Girls). Women are the main focus of the book, in which the author also expresses his joy over the victory of free speech, referring to the district court’s acquittal in January.

Update:  Over at her Spectator blog Melanie Phillips once again rallies to Hedegaard’s defence. His only crime, apparently, was to “draw attention to child abuse and violence against women in Muslim culture” and he “stressed that his opinions were about Islam and not intended to refer to all Muslims”. Sure. And you can imagine how Mad Mel would have reacted if Hedegaard’s racist remarks had been directed at Jews rather than Muslims.