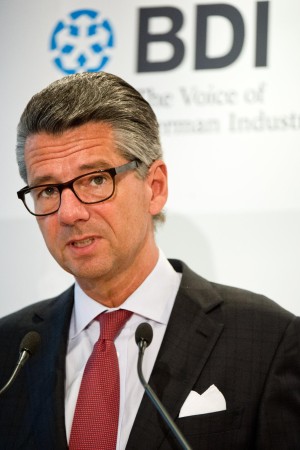 The president of the German Federation of Industry, Ulrich Grillo, said the emergence of the group “Patriotic Europeans Against the Islamisation of the Occident” or PEGIDA, which has been holding weekly marches, was undermining the country’s interests and values.

“We have long been a land of immigration and we must remain so,” he told German news agency DPA. “As a prosperous country, and also out of Christian love for our fellow man, our country should take in more refugees.”

Grillo blasted the PEGIDA protests, which organisers have billed as a grassroots movement, calling participants “neo-Nazis and xenophobes”. He said the group was trying to harness fears of Islamist terrorism “to smear a whole religion” which he called “unacceptable”.

He said Germany’s rapidly ageing population needed a strong influx of qualified newcomers to support the economy and the social welfare system. “Considering our demographic development, immigration ensures growth and prosperity,” he said.

He urged political leaders to do more to stand up to PEGIDA. “The political class has got to try harder to make citizens see the opportunities and diminish their fears,” he said.

The government’s top official for integration, Aydan Ozoguz, agreed that Berlin could not afford to simply wait for PEGIDA to fade away. “We need to do more to educate people. That takes longer but has a longer-term impact,” she told AFP.

Ozoguz attributed PEGIDA’s rise to everything from “personal fears of slipping living standards to the fear of becoming an ethnic minority to a vague fear of Islam”.

A record 17,500 people joined a PEGIDA march against the “Islamisation” of Germany in the eastern city of Dresden late Monday in the 10th demonstration in as many weeks, with smaller clone groups rallying in three western cities.

About 4,500 people marched in a counter demonstration under the slogan “Dresden Nazi-free”, warning that there was no room for racism and xenophobia in the country that perpetrated the Holocaust.

Politicians from all major parties have been stunned by the emergence of the right-wing nationalists who vent their anger against what they consider a broken immigration and asylum system.

The movement has emerged at a time when Germany, which has fared better economically than most of its eurozone partners, has become the continent’s top destination for asylum seekers, and the world’s number two destination for migrants after the United States.

PEGIDA said it would not hold a rally next Monday, between Christmas and New Year’s Day, in order to give police guarding the protests a break.