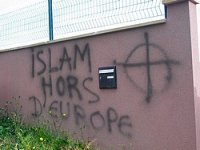 Police have opened an investigation after vandals scrawled swastikas and xenophobic slogans on the construction site of a mosque in north-western France, prosecutors said Thursday.

Inscriptions reading “Islam get out of Europe”, “No to Islam and to burkas”, along with swastikas, were discovered on Wednesday in Herouville-Saint-Clair, a suburb of the city of Caen in Normandy.

The incident came a day after French lawmakers passed on first reading a bill banning women from wearing the full-face Islamic vail in public.