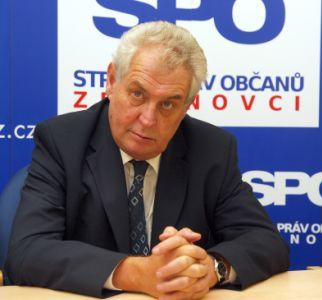 Retired politician Milos Zeman, Czech prime minister in 1998-2002, faces a criminal complaint over the statements on Islam he made in June at an international conference on Europe.

“The enemy is the anti-civilisation spreading from North Africa to Indonesia. Two billion people live in it and it is financed partly from oil sales and partly from drug sales,” Czech news servers quoted Zeman as saying about Islam at the recent conference.

Zeman said Thursday Muslims believe in the Koran like Nazis believed in racial supremacy and anti-semitism and communists in class struggle and dictatorship of the proletariat.

He said Islam is far more aggressive and intolerant than present Christianity, Buddhism, Confucianism and other world religions.

He added that the Koran includes passages calling for the subjugation, enslavement and even elimination of non-believers.