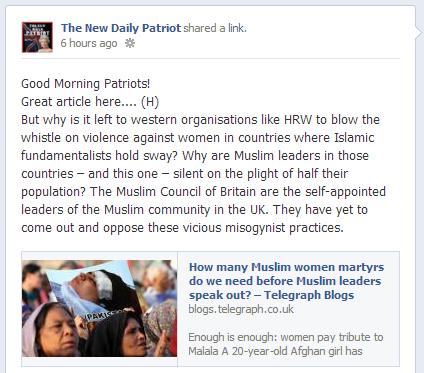 The New Daily Patriot is a popular far-right Facebook page which provides links to media reports that are of interest to fascists. It supports both the English Defence League and the British National Party (while inclining more towards the latter) and happily promotes the activities of openly neo-Nazi groups like the National Front.

This non-sectarian approach extends to the sort of material that is recommended on the page, which includes articles by individuals who are not themselves racists or fascists but whose views provide support and inspiration for those who are. Today, for example, the NDP has posted a link to an appalling piece of crap that appeared on Cristina Odone’s Telegraph blog yesterday, in which she harshly criticises the elected leadership of the Muslim Council of Britain (who, as is the way with this sort of article, are inevitably described as “self-appointed”) for failing to condemn actions such as the recent reported beheading of a young Afghan woman by her in-laws for refusing to become a prostitute.

Quite what this horrific case has to do with the MCB, or indeed with Islam, is unclear. Odone finds it significant that the murder took place in the “Taliban-stronghold” of Herat, but provides no explanation of why this should be relevant either. You don’t have to an uncritical admirer of the Taliban to question whether forcing young women into prostitution really forms part of their programme.

The sole connecting link between the MCB and people who carried out the killing in Herat is of course that they are Muslims. The fact that such a crime would be unanimously opposed by Muslim communities and their leaders worldwide is of no consequence to Odone. According to her the MCB has a duty to make a public declaration against the crime because the perpetrators are (at least nominally) their co-religionists. “How many women martyrs do Muslim leaders need before they speak out against such misogyny?” Odone demands.

Following this logic, should we condemn Vincent Nichols for failing to denounce every crime committed across the world by individuals who happen to be Roman Catholics? Would Odone think that was a reasonable criticism of the leadership of her own faith community?

Even the unequivocal statement on the attempted murder of the young Pakistani woman Malala Yousafzai from MCB secretary general Farooq Murad (“The horrific attack on Malala Yousafzai is to be condemned, and has rightly been done so by Pakistan’s responsible political and religious leaders”) just isn’t good enough for Odone. “Not the kind of whole-hearted condemnation the Muslim community needs to hear from its leadership,” she sniffs.

You can see why Odone’s piece meets with the enthusiastic approval of fascists. Because this is exactly the sort of warped reasoning they themselves use, according to which the criminal actions of any Muslim anywhere in the world reflect on the Muslim community as a whole. They’re all followers of Islam, the reasoning goes, so they’re all implicated. If Muslim leaders in the UK fail to condemn every attack on every woman across the globe, or don’t do so as emphatically as their critics demand, then they are denounced as defenders of violent misogyny themselves.

As recently as 2007 Odone was prepared to co-sign a letter defending the MCB against ignorant attacks by Pauline Neville-Jones and David Cameron. Since then she has entirely lost the plot. Earlier this year she asserted on the basis of no evidence whatsoever that the murder of Shafilea Ahmed was inspired by her Muslim parents’ religious beliefs. With this latest piece she has confirmed that she has turned into a contemptible bigot whose irrational rants feed the violent anti-Muslim racism of the far right.

Somehow I doubt that Cristina Odone will write a piece attributing this particular act of violence to the religious beliefs of the alleged perpetrators, or demand that the UK leadership of the Christian denomination to which the killers belong should issue a statement condemning them.