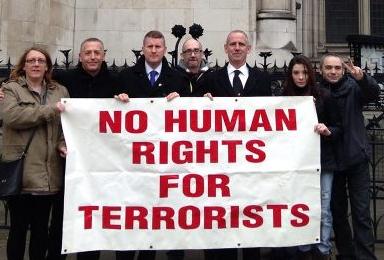 A high court judge has banned protests by groups such as the English Defence League being held within 500 metres of the home of the radical Islamist cleric Abu Qatada.

Mr Justice Silber said the injunction issued on Monday was necessary because the protests, which have been held on a weekly basis, had terrified the cleric’s family, particularly his children, the youngest of whom is aged 11.

Abu Qatada, who was once described by a Spanish judge as Osama bin Laden’s right-hand man in Europe, is currently out on bail under a 16-hour daily curfew. The home secretary, Theresa May, is appealing against a ruling by British judges that he cannot be sent back to Jordan while there is a risk he faces a trial based on evidence obtained through torture.

The high court injunction issued on Monday will ban the English National Resistance, the English Defence League, Britain First, the South East Alliance, the English Volunteer Force and others from staging demonstrations within 500 metres of Abu Qatada’s London home.

“There was powerful evidence from the claimants of weekly demonstrations with much shouting of abuse such as ‘Abu Qatada off our streets’, ‘all Muslims are terrorists’, ‘murdering scumbag’, ‘go back to Jordan’, ‘just murder him’ and ‘forget all this just kill him’, Silber said in his ruling. He said some of the chanting and shouting had lasted up to six hours.

Abu Qatada’s wife and five children, who brought the case, said the protests had terrified them. The 11-year-old said: “I feel they are a threat to us and I feel scared in the house. I also feel scared when walking outside even on a normal day (when there is no demonstration).”

The cleric’s second eldest child, aged 21, said: “When the demonstrations occur, usually on Saturdays, the whole family has to stay in the house. When they first arrive it is very startling and then it is frightening … the demonstrators frighten and panic me and have the effect of worsening a medical condition that I suffer from.”

The groups staging the protests vowed on their websites never to stop the demonstrations, and to expose his every address. “We intend to make his life a misery,” they said.

The judge said the order would extend a temporary ban issued on 1 February to prevent a demonstration taking place outside the house the next day. Silber stressed that it was perfectly legitimate to protest against Abu Qatada’s presence in Britain and the provision of a taxpayer-funded house for the cleric and his family to live in. Abu Qatada himself was not involved in the case.

A second injunction granted on Monday prevents the publication of the names of the children, their pictures and the schools they attend, to prevent further harassment.